DMZ goes from war zone to a place of peace : Improving Korean relations have artists and officials imagining possibilities

DMZ goes from war zone to a place of peace : Improving Korean relations have artists and officials imagining possibilities 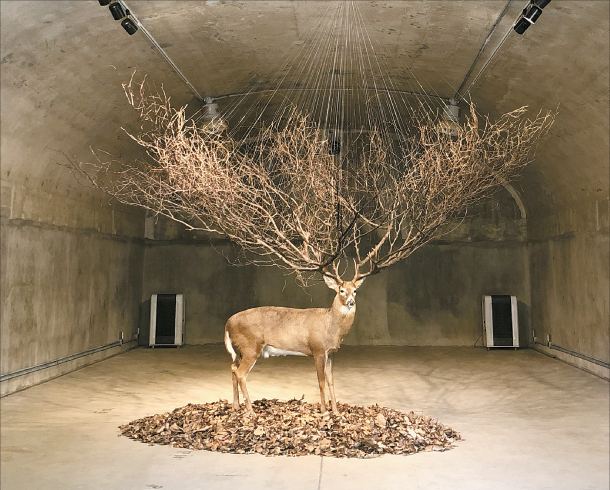 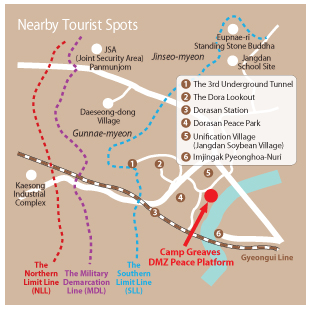 PANMUNJOM, Demilitarized Zone - The relationship between South and North Korea seems to be improving daily. The 2018 PyeongChang Winter Olympics successfully came to a close being branded as the “Peace Olympics,” according to the Ministry of Culture, Sports and Tourism, and ever since, the two countries have been holding joint sporting events and performances, as well as a series of talks between the two leaders. The mitigated tension is certainly making South Koreans, especially government officials, hopeful about the future of the Korean peninsula.

Many believe it is about time to educate young Koreans about the significance of realizing peaceful unification, and the chance that Korea can become representative of a peaceful resolution. Officials have selected the demilitarized zone (DMZ), where the tensions between the North and South are most palpable, as a venue to carry out various “Peace Education” and “Peace Tour” programs.

On Tuesday afternoon, Education Minister and Deputy Prime Minister Kim Sang-gon, and Culture Minister Do Jong-hwan, as well as a group of education superintendents from different regions came together to take a tour around the DMZ and into the Joint Security Area (JSA) in Panmunjom to brainstorm ideas for various on-site education and tour programs for students and visitors.

“It is really different seeing things so close up,” said Minister Do as he approached North Korean soldiers in the JSA.

He then asked the North Korean soldiers, who were only steps away from him, “It is really hot, isn’t it?”

The group also got to see inside T2, one of the blue buildings that functions as a meeting room for the United Nations Command Military Armistice Commission.

“The buildings you are standing in were designed to foster talks between North and South Korea,” explained Sean Morrow, a Battalion Commander at United Nations Command. “We bring about 100,000 tourists a year into this place. And our North Korean counterparts are also invited to do the same.”

According to Morrow, the atmosphere inside Panmunjom has improved since June 12, they have had “multiple opportunities to speak to their counterparts and move the conversation forward.”

“Today we were honored to return a North Korean soldier who was deceased back to his country and his family,” Morrow added.

According to Morrow, about 25,000 visitors visit from the North Korean side, and that number has been increasing in recent years.

“We’ve been seeing an increase and we expect the number to double this year,” he said.

Although government officials took the tour around the DMZ in order to draw up new programs, there have been several art and culture programs held around the DMZ for many years.

Currently Camp Greaves, a former U.S. Armed Forces based located in Paju, Gyeonggi, stands as an art museum for students and visitors. The venue housed American soldiers for 50 years, until their withdrawal in 2004. It is frequently visited by large-size groups who come to experience the rooms real soldiers used to live in, but beginning this year, the regional government has worked to attract more than just military enthusiasts.

The Camp Greaves DMZ Peace Platform project is a joint effort between the Gyeonggi Tourism Organization and the Gyeonggi Provincial Government to take the history of the camp and turn it into a stepping stone for a peaceful future between the two Koreas. Until Oct. 31, a total of 17 works by 10 artists will stand in different spots around the camp, transforming what used to be a house of arms into a museum that reflects on the meaning of life and peace.

After a renovation of the abandoned facilities in 2013, the camp has mainly been visited by students coming to learn about the history of the Korean War (1950-53) while also spending the night at a hostel on the base. As attractive as some of the attractions were - a night at a former military base, a chance to take pictures where Song Joong-ki and Song Hye-kyo filmed the hit drama “Descendants of the Sun” in 2016 - the museum struggled to attract visitors interested in learning about the future of peace on the peninsula.

The Peace Platform project thus brought in works of artists who create just that: a future of peace. A colorful neon sign reading “Ism Ism” by Insane Park is the perfect work to welcome guests to the base, kicking off a number of works that carry the message that ideological battles should be forgotten. Next to the work is Kang Hyun-ah’s “The Strange DMZ Eco Nuri Park,” where illustrations of almost-real creatures that the artist imagines could be living in the untouched area - such as “Post-traumatic tree,” “Lights-out firefly” and “Grieving pasqueflower” - are displayed along a small forest-like path.

At the base’s powder magazine are two works of “Tanyakgo Project #1 : Playground 0” by Kim Myeong-beom. An old aluminum slide and a stuffed deer with massive wooden antlers quietly stand inside a space that used to store ammunition. For Kim, having a child’s playground prop and a deer as a symbol of peace and nature is a perfect way to reimagine the once-violent space.

Kim bought the deer in the United States. The antlers stretch into the air like tree branches. The twigs were collected off the ground, and glued onto the antlers to make it look as if a tree was growing out of the deer. “As a child, when I went to the zoo and saw a deer, I used to imagine that their antlers would keep growing,” said Kim prior to the opening of the camp.

“It turns out that they shed their antlers, just like trees lose their branches. They fall to the ground, and new life begins from that nutrition. It’s a process of life and circulation, inside a place where there used to be war. I wanted to show that contrast.”

Artist Park Chan-kyong’s video, “Media Project #1 : Child Soldier” (2017), adds a mysterious touch to the message of peace. Displaying what he imagined would have been “a pure representation of North Korea, free from any stance,” according to the artist. Park has created a scenery in which an “innocent young soldier takes a break, plays music and whistles on the mountainside.”

The model is a Korean teenager and the mountainous backdrop is actually in South Korea. By assuming that it may as well as be an image of North Korea, Park suggests that we step back and look around - that it was the war and ideology that people saw, not the humanity of the North Korean soldiers.

“I created an image that shows the weak and vulnerable side of the North Koreans,” said Park to the Korea JoongAng Daily. “It’s almost uncomfortable to see. But by doing that, we’re taking the chance to see North Korea without the political filter we have, and seeing them raw.”

Other works also twist the war-like environment of the camp. An old tent with its windows covered in colorful clothes is a work named “Full Square” by Chung Mun-kyung, in which the remnants of the past are turned into a colorful future.

Jung Bo-kyung’s “Non-missile Zone” signs are positioned in different parts of the base as if they were always there, as if to say that peace can only come when we think about it frequently in our everyday lives.

“Tochka City Project: Object for Emergency” by Jang Young-won are the actual protective walls that were taken down from a street in Gyeonggi.

Jang Yong-sun’s “Treasure N37°53’56.8212” E126°43’43.2192”’ uses trees and plants that were thrown away after being removed from urban areas, and creates a new environment. Parts of a barbed-wire fence are taken from the actual fences of the camp, and displayed around the room with lights like pretty house decorations.

“After the weeding time in the city, the grass dies,” said Jang. “To me, that felt like oppression, just like war. If you see the fences along the DMZ border, the plants grow on and over the fences, crossing man-made limitations. By taking that image and putting the dead grass in a new space, the work is creating new life upon the ashes of life.”

Two multimedia works, on the other hand, provide a more direct representation of the realities of war.

“Your Flame II” (2018) by Park Seong-jun plays images and sounds from the Iraq War of bullets and bombs going off as the visitors walk into what used to be a bowling alley for U.S. soldiers.

Lastly, in a work by c.realTimes, a mine-sweeping game installed on old versions of Windows computers has been turned into an interactive game in which the visitors move their arms and legs to look for mines with their shadows. When a mine goes off, a loud, high-pitched note is played along with random images of modern society, to let people experience the sensory chaos that occurs when people step on a landmine.

“Each work shows a different side of war and peace,” said Lee Eun-kyoung, the artistic director of the Peace Platform project. “We thought about how to take the history of the site that once was a place of war and battle, of violence, and turn that into a peaceful future. Art, we believe, is a means to connect the different people and ideologies. And by putting works of art into this place, it’s a way for us to move a step forward into a peaceful future.”