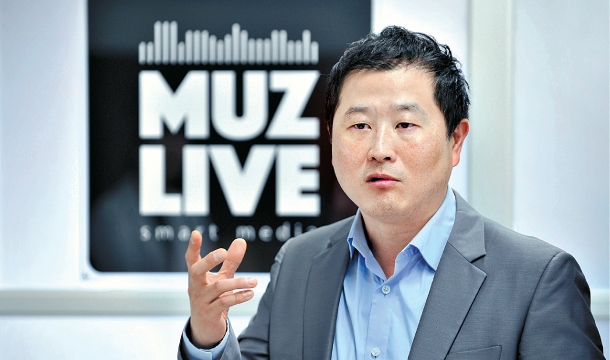 Muzlive CEO Joe Seok discusses his start-up and why physical music can survive in a world dominated by digital alternatives. [SPARKLABS]

It’s hardly news that online streaming dominates today’s music market. CDs have had a steep decline in sales over the past decade. One local start-up is hoping to bring back physical music through an unlikely means - the smartphone. 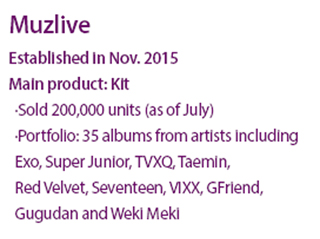 “The market for physical records [CDs and LPs] stood at $5.4 billion [last year],” said Muzlive CEO Joe Seok. “This figure is impressive, considering the fact that barely anybody owns a personal CD player these days.”

Muzlive produces music devices called Kits. These palm-sized square boxes can play music on smartphones once they are connected to a portable device’s earphone jack.

Once connected, the Kit immediately activates the company’s app so it can start playing music. Users can scroll through a photo album, play music videos or record themselves singing alongside a song’s background music. It also offers access to exclusive fan communities.

Using a Kit is different from downloading or streaming because the songs and content of the album can only be accessed after connecting the device. Songs and media can only play on one phone at a time.

Muzlive has had an impressive run since it released the first Kit last year: it has sold around 200,000 Kits so far for 35 K-pop artists, including Super Junior, Exo and Seventeen, and is discussing potential collaborations with Universal Music Group. Starting this year, Kits are also being counted by local music charts as album sales.

The Korea JoongAng Daily sat down with Seok to discuss the success of his innovative device, which merges physical and digital forms of music. 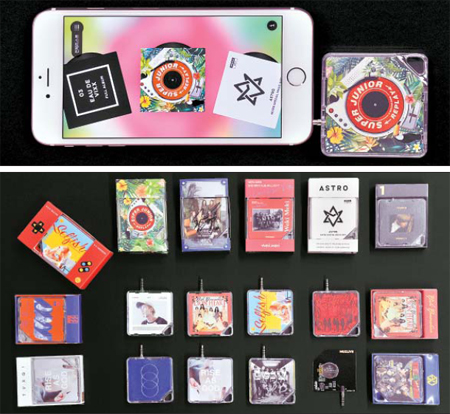 Muzlive’s Kits, which play music and other content. Since last year, 35 K-pop albums, including those by Super Junior, TVXQ and Taeyeon, have been released as Kits. [SPARKLABS]

Q. What motivated you to make a physical music device?

A. I’ve worked on various businesses that merged IT and music in the last 11 years, and one thing I’ve learnt is that content alone can’t make a profitable business. Compared to the 1990s, a larger number of people are consuming music. But the music market itself lost two-thirds of its revenue along the way because people stream or download songs for very low prices instead of paying for albums.

In the music market, physical music is similar in size to digital music [both were around $8 billion last year according to The International Federation of the Phonographic Industry.] Although there are fewer consumers of physical music, they must pay 20,000 to 30,000 won ($18 to $26) for an album compared to digital music users paying 2 to 3 won per song.

So we thought that if we can make a music device that would fulfill people’s urge to possess a physical item and is practical enough to be playable on devices that everybody has, it would cater to both markets.

Why would people pay for Kits if they can download music and visual content online at a much cheaper price?

I believe a sense of inclusion and fellowship comes from possessing tangible objects. You may hesitate to pay 500 won to download a song but happily pay 20,000 won for a fully-packaged album. The excitement of purchasing, bringing it home and playing it for the first time on your audio device doesn’t exist with digital music.

Another interesting recent phenomenon is LP record sales going up while CDs are declining. Record players are even harder to find than CD players. I think that sort of satisfaction, possession and the steps you go through for it is part of our basic instinct. We see the same case in games: People can play games online, but nonetheless they buy Nintendo and PlayStation consoles.

That’s why all the kits come in their current size. In terms of technology, they can be made much smaller, just the size of a thumb. But if they get too small, they lose value as a collector’s item.

Are there any exclusive benefits given to fans that purchase Kit?

It depends on the album. Some have photos that are exclusively available inside the Kit. We also insert videos that are available on YouTube, but a recent product we made in June was a Kit for the idol group Red Velvet’s concert video, and this film is available nowhere else. Through the device, you can also be connected to a fan community that is only for Kit owners. Girl group Mamamoo’s member Moonbyul recently started communicating with her fans using Kit.

We plan to add platforms for merchandise purchases and streaming services in the future. The aim is not just a device for listening to music, but a token to a music platform that has everything related to an artist. This is a stage that even leading streaming services haven’t reached yet. Right now, fan communities are dispersed across portal sites and social networks. If we can bring artists to join fans in Kit, this will offer another sense of inclusiveness.

Can the people behind the music benefit from the device?

A big reason the business was able to grow quickly was because it’s a win-win for everybody in the music market. Streaming music costs a few hundred won, whereas a Kit costs more than 10,000 won. For a 10-song album, if consumers stream a song, this leaves 2 to 3 won for the people who made the music. Our Kit offers the same amount of songs and can give them a lot more. A lot of major music companies like Universal told us they’ve been looking for the next physical music media device after CDs. They know physical music sells and brings in more money than digital, but they are also concerned that CD players are disappearing.

It’s not just music: Any cultural content that generates low profits because it is mostly sold online, like games or educational content, can generate much more money by switching to Kits.

To be precise, Kits themselves don’t contain content. They’re basically a key that contains a unique ID that grants access to our cloud. This cloud is what holds the data. In other words, Kits can offer infinite content on portable devices. We’ve already received calls from DVD manufacturers and publishers of educational content for kids. One interesting project we’ve done this year was a Kit for the TvN reality show “Road to Ithaca.” Kits were sold when the series started and new episodes were constantly added on the cloud as the show went on.

What are your future plans for the year?

This year’s goal is to focus on establishing fan communities inside Kit. We’re also discussing to release Kits for global artists like Taylor Swift and BTS [both managed by Universal in the United States]. For sales, we’ve already surpassed last year’s revenue as of July. There are other K-pop artists that we can’t mention who are considering releasing Kits this year.