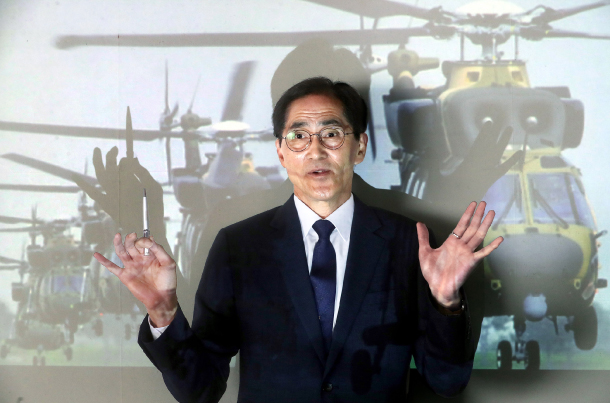 Hwang Jeong-seon, A former professor at the Air Force Academy and researcher at the Agency for Defense Development

Controversy still swirls over possible technical defects in the Korean military helicopter that crashed on July 17 in Pohang, North Gyeongsang, killing five Marines on board.

The helicopter in question is the MUH-1, or Marineon, a modified version of the KUH-1 Surion. It was the product of a strenuous four-year development process that cost more than 1.3 trillion won (＄1.1 billion). Over 90 of the helicopters have been deployed nationwide.

A probe consisting of civilians, military and government officials is currently underway to investigate the causes of the crash, focusing on possible technical defects that may have led to the helicopter’s rotor breaking off from its fuselage just four to five seconds after takeoff.
The accident has given credence to critics who once called the Surion a “tin can chopper” due to its frequent mechanical defects. Voices have also emerged linking the helicopter’s potential faults to possible corruption in the defense industry.

Hwang Jeong-seon does not agree. He participated in the Surion’s development for six months after it began in January 2007 up until its completion in June 2012. A former professor at the Air Force Academy and researcher at the Agency for Defense Development, Hwang worked in the Korean Helicopter Program specializing in appraising static and dynamic loads and crashworthiness. He says it was an honor for him to participate in the development of the first domestically manufactured chopper in Korean history.

Though he retired in May, Hwang remains devoted to helicopter research, saying that he wants to be remembered as a person who made a good chopper. He says the current atmosphere in his industry is strained, and there needs to be more encouragement to those who built the country’s first helicopter.

The JoongAng Ilbo asked him about the development of the Surion at its offices on Wednesday.
Below are edited excerpts of the interview.

Q. What do you think are the causes of the crash?

A. First, I would like to express my condolences to the deceased as well as to their families. I have also served in the Air Force and am aware of the pain that comes with losing fellow comrades in the line of duty. Reports have said the recent accident was similar to the Super Puma helicopter crash in Europe, but I don’t concur. The Marineon’s rotor blades spin between 270 revolutions per minute (rpm) and 4.5 revolutions per second. Before the entire rotor detached from the chopper, one of its blades was seen breaking off. If this happens, the chopper is bound to lose balance and its weight will be pushed to one side. But it is wise not to make any foregone conclusions before the investigation.

Analysts often cite problems with the performance of the Surion, from which the Marineon was based on, as related to the recent accident. What do you think?

I want to stress that the Surion and Marineon are different helicopters. I can’t go into the details since I did not participate in its development, but the Marineon was adapted from the Surion after accounting for the Marines’ operational conditions. Many parts of it were modified or added, such as adding an anti-corrosive coating, foldable rotor blades for naval storage, inclusion of a supplementary fuel tank for longer flights and a tactical air navigation system. Usually when an aircraft model is developed, a variety of different offshoots eventually emerge suited for different needs. Because of this, whenever issues emerge with different models, we cannot simply attribute it to problems with the original machine.

Years ago, there were reports about issues with freezing in the windshield of the Surion helicopter. What do you make of this?

The helicopter possessed the capability to remove ice on its windshield since its development. Any defects or issues were resolved after two freezing tests we conducted throughout the months last winter in Michigan, and airworthiness authorities are currently reviewing changes made to the original designs. On top of the glass in front of the pilot seat, there is a cutting device that cuts away obstacles if the helicopter gets stuck in electric wires. We installed heating cables on the device to prevent ice from forming and breaking off and entering the engine. There is no precedent for something like this anywhere in the world.

Do accidents like this happen in the early development stages in other countries?

When we say helicopter, the model that comes up in most people’s minds is the UH-60 Black Hawk chopper, which the Army possesses. In the early 1970s, a prototype of the UH-60 developed to compete in the U.S. Army’s Utility Tactical Transport Aircraft System competition crashed in the mountains during a flight test while carrying armed personnel. There were light injuries to the passengers, but the chopper returned to base after changing its damaged rotor blades on the spot. This accident effectively led the U.S. Army to select the UH-60 as the winner of its competition. Accidents can happen, but the survivability of the aircraft was valued.

What do you make of the survivability of the Surion?

There is a word we often use as jargon called “crashworthiness,” which refers to the level of survivability guaranteed in a potential crash. This is a design principle which is kept in mind to ensure that the aircraft’s pilot and passengers survive in a variety of potential accidental circumstances. The Surion was designed to possess a higher crashworthiness in relation to the AS 532, from which it was based on. It is on a level comparable to the UH-60 Black Hawk.

Some point to the Surion chopper as a symbol of corruption in the defense industry and call it a tin-can chopper. What would you say to such criticism?

Evaluations of the chopper should be more nuanced than a simple good or bad label. There should be a greater range of options given for evaluations. But currently, the problem is that only negative voices dominate. In some cases, people accuse you of political bias if you are willing to defend the Surion. But how can there be political partiality when it comes to the development of defense armaments? A host of agencies, including three defense firms — the Agency for Defense Development, Defense Agency for Technology and Quality and the Korea Aerospace Industries — as well as the Army and the Defense Acquisition Program Administration were involved in the Surion’s development, as well as countless other technicians and scientists of subcontracted companies. It is unfair that all these people are being attacked.

Do you think plans to export the Surion chopper will be affected by the accident?

The aircraft has enough competitiveness in the international market due to its cutting edge avionics display systems and automatic engine control mechanism. As I said earlier, one must not equate the Surion and Marineon as the same helicopter. If the mechanical cause of the accident is attributed to machinery shared by the two choppers, we can make that conclusion, but we shouldn’t make any hasty judgments.