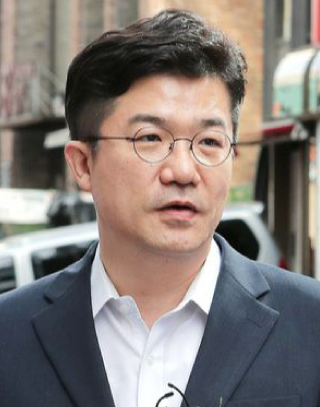 A top presidential aide may have violated campaign finance laws in the last two legislative elections, a special counsel said on Tuesday.

The independent counsel investigating a political influence campaign during last year’s presidential election said it came across evidence that Song In-bae, the president’s secretary for political affairs, received about 200 million won ($177,000) from a country club in Chungju, North Chungcheong, between 2011 and 2016.

Song was registered as a board member overseeing marriages at the Cygnus Country Club during that time and received 3 million won every month as a regular salary.

At the same time, he ran twice under the Democratic Party for a seat in the National Assembly in Yangsan, South Gyeongsang, in 2012 and again in 2016.

Given the distance between his home district of Yangsan and the country club in Chungju, the special counsel said there was little likelihood that he took any part in managing the business. There are also no records of any marriages taking place at the country club during that period, the counsel said. It suspects the board position might have been a sinecure through which Song received funds from the club to finance his political career.

Campaign finance laws stipulate that any money given to a candidate running for legislative office must be deposited into a registered account. Since the statute of limitations on violations is seven years, that leaves Song open to indictment should the counsel’s allegations prove true.

The Cygnus Country Club was established by Kang Geum-won, the former chairman of Changshin Textiles, who was one of former President Roh Moo-hyun’s biggest donors. Song was one of Roh’s former aides and maintained close ties with Kang, who died while serving a prison sentence for embezzlement in 2012. The club is now run by Kang’s wife and son.

The special counsel came across the evidence while investigating Song for his ties to the blogger Kim Dong-won, who is accused of using software to influence social media comments in favor of President Moon Jae-in during last year’s election.

On Sunday, the counsel questioned him over allegations that he introduced Kim Dong-won to current South Gyeongsang Gov. Kim Kyoung-soo, then a campaign aide for Moon, and that he received 2 million won from Kim Dong-won’s group for lectures he gave.

However, the special counsel is divided on whether to pursue charges of campaign finance violations or toss the case to the prosecution. That’s because the special counsel’s mandate, which is stipulated in a bill passed by the National Assembly on May 29, limits the scope of their probe to suspects involved in the political influence campaign and any criminal activity directly relevant to Kim Dong-won and his group.

The ruling Democratic Party on Wednesday accused the special counsel of playing politics by overstepping the bounds of its investigation and focusing its crosshairs on Song’s personal affairs.