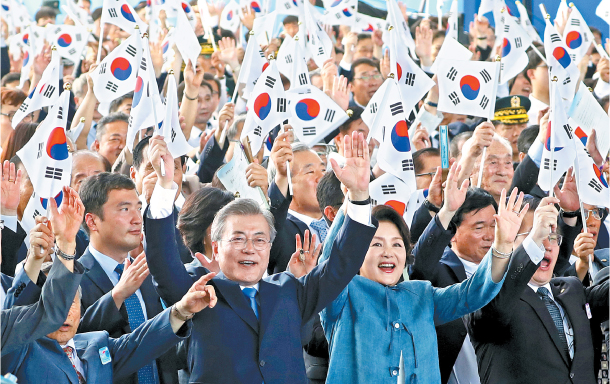 President Moon Jae-in and his wife Kim Jung-sook cheer, holding Korean national flags in their hands, along with dignitaries to commemorate the 73rd anniversary of Liberation Day at the National Museum of Korea in Yongsan District, central Seoul, on Wednesday. [YONHAP]

President Moon Jae-in on Wednesday proposed using railroads to bring together the two Koreas, Japan, China, Russia, and Mongolia and having the United States as a project partner in an address commemorating the 73rd Liberation Day.

“I propose the creation of the East Asian Railroad Community today, encompassing six Northeast Asian countries and the United States,” the president said before a flag-waving crowd at the National Museum of Korea in Yongsan District, central Seoul.

The proposal is in line with Moon’s “New Northern Project,” in which the president envisions re-connecting railroads between the two Koreas so that movement of goods and people can expand as far as into the European continent from South Korea, which has been boxed in geographically due to the peninsula’s division for 70 years.

“The community will expand the horizon of the Korean economy to the northern part of the continent and become the main artery of mutual prosperity in Northeast Asia,” he continued.

The president said it was his “goal” to hold groundbreaking ceremonies for reconnecting railroads and roads between the two Koreas by the year’s end, noting the reconnections would be the “beginning of mutual prosperity.”

Highlighting the potential of such a “railroad community” for the region, Moon compared it to the European Coal and Steel Community created in 1951 by six European nations in the wake of World War II, which eventually led to the European Union.

Moon also pledged to establish so-called special unification economic zones in the border areas of Gyeonggi and Gangwon in cooperation with North Korea, saying that such ventures would bring to South Korean companies “huge progress in addition to the numerous jobs created.”

While he did not offer specifics on the proposed plan, it was likely that he had in mind the Kaesong Industrial Complex’s business model, which would bring together South Korean capital and North Korea’s cheap labor.

The Kaesong complex was shut down in February 2016 by a former conservative government in response to North Korea’s fourth nuclear test a month earlier.

Emphasizing that improved inter-Korean ties could be a boon to a South Korean economy with slowing growth, he remarked, “Peace is the economy,” stressing the two were “synonymous.”

In pitching an optimistic forecast of a future based on a nuclear-free North Korea, he said the impact from fully realized inter-Korean economic cooperation could reach “170 trillion won [$149.8 billion] at a minimum over the next 30 years,” citing government research.

He said the 170-trillion won figure could be reached with operations of the reconnected inter-Korean railroads and “certain natural resource development projects,” plus the resumption of the operation of the Kaesong Industrial Complex and Mount Kumgang tour program, two inter-Korean business projects that have been stopped since 2016 and 2008.

But in order for the project to proceed, North Korea should carry out practical denuclearization steps so that international sanctions barring foreign investments or business deals with Pyongyang could be lifted. Without progress on denuclearization talks between the North and United States, inter-Korean and multinational cooperation mentioned by Moon Wednesday, has little chance of being realized.

To lift economic sanctions, the United States insists the North take tangible denuclearization steps such as submitting a listing of its nuclear arsenal and nuclear and missile facilities.

But without progress in the North’s denuclearization, there isn’t much Seoul can do on its own to take inter-Korean relations to the next level.

Washington made that point clear, saying the South-North relations “cannot advance separately from resolving North Korea’s nuclear program” in a statement by the State Department on Monday.

With that in mind, Moon said only when “complete denuclearization” and “peace” are established on the Korean Peninsula, “economic cooperation can be carried in earnest.”

Looking back on a series of diplomatic feats achieved over the past six months - during which there have been two inter-Korean summits and a North-U.S. summit - Moon said the two Koreas “agreed to completely cease all hostile acts against each other in every domain, including land, air and sea” and that the two are in daily contact through communication channels that were restored on the occasion of the April 27 inter-Korean summit.

He also lauded the June 12 Singapore summit of North Korean leader Kim Jong-un and U.S. President Donald Trump, saying the event was achieved “with the determination” of the two leaders to walk the “path of peace and prosperity together.”

While stressing the importance of Pyongyang and Washington striking a deal, for which Moon has assumed the role of a mediator, Moon emphasized it was important to remember the Koreans were “the protagonists” on this whole issue.

Casting aside a notion that inter-Korean relations were only the “by-effects” of the North-U.S. relationship, the former Special Forces commando said strong Seoul-Pyongyang ties were the “driving force behind the denuclearization of the Korean Peninsula,” making clear his commitment to further improving inter-Korean relations to a new level on the back of fast-changing diplomacy.

On his upcoming third meeting with North Korean leader Kim in Pyongyang next month, for which a date has not been fixed, Moon said he and Kim would “take an audacious step” toward declaring an end to the 1950-53 Korean War, the signing of a peace treaty and the “complete denuclearization of the Korean Peninsula.”

The three-year conflict ended in an armistice, not a peace treaty, leaving the two Koreas technically at war. Pyongyang has been calling for an end-of-war declaration as a security guarantee in return for taking denuclearization actions.

The upbeat tone of Moon’s Liberation Day speech envisioning potential economic benefits from a nuclear-free Korean Peninsula Wednesday was markedly different from last year’s, when the United States and North Korea appeared on the brink of waging war with exchanges of bellicose rhetoric.