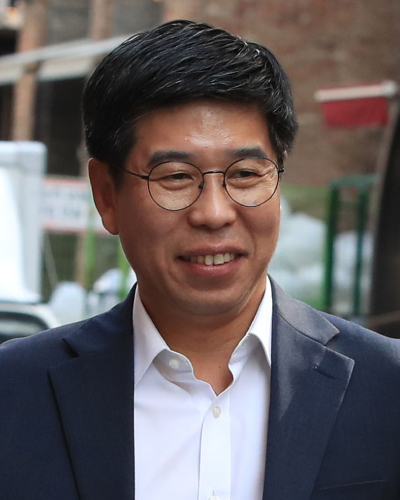 Baek Won-woo, a presidential secretary for civil affairs, outside the independent counsel’s office in southern Seoul on Wednesday.[YONHAP]

A special counsel investigating a political influence campaign that occurred during last year’s presidential election questioned a Blue House aide on Wednesday about his ties to the case’s main suspect, who allegedly asked for sinecures in exchange for helping the president’s campaign.

Baek Won-woo, a presidential secretary for civil affairs, waved off questions from reporters as he entered the independent counsel’s office in southern Seoul on Wednesday morning.

The counsel believes South Gyeongsang Gov. Kim Kyoung-soo, a key ally of President Moon Jae-in, asked Baek for help this February when he was blackmailed by a blogger, Kim Dong-won, over the help he gave to Moon’s campaign last year.

Kim Dong-won and his associates would post comments on social media that were favorable toward Moon and artificially inflate the number of “likes” on those comments.

At the time, Kim Kyoung-soo was a lawmaker and key campaign aide, and prosecutors believe he may have promised government posts to the group in exchange for their help.

In December, Kim Dong-won asked Kim Kyoung-soo to give the consular position in Osaka, Japan, to one of his closest associates, according to both men’s testimonies to the special counsel.

Kim Kyoung-soo then delivered the message to the Blue House through Baek.

The governor told the special counsel on Sunday that he might have made a counterproposal to Kim Dong-won of the consul general seat in Sendai, Japan, rather than Osaka, reversing his earlier claim that no favors were promised.

The counsel believes Baek might have seriously considered the request when he met with the associate, a lawyer named Doh Du-hyeong, at a reception room in the Blue House on March 28, one week after Kim Dong-won was arrested by police.

Doh later told prosecutors during their own investigation that he believed the meeting was an interview.

With the special counsel’s mandate set to expire on Aug. 25, the team is scrambling to collect as much evidence as possible. Of interest is whether Baek was aware of the group’s political influence campaign during the election and whether his meeting with Doh was meant to appease them as investigators closed in on the group.

For the special counsel, Baek’s exchange with Doh will be key to proving whether political favors were traded. In the case that they were, Kim Kyoung-soo and Baek could be subject to indictment.

The special counsel is also looking into whether Baek might have abused his power as a presidential secretary overseeing the government’s law enforcement authorities and intervened on behalf of Kim Kyoung-soo during the police and prosecutors’ investigations into the case.

With his closest aides as direct targets of the probe, Moon will be politically pressed to accept the request.