After the North took his brother, he nearly gave up

After the North took his brother, he nearly gave up 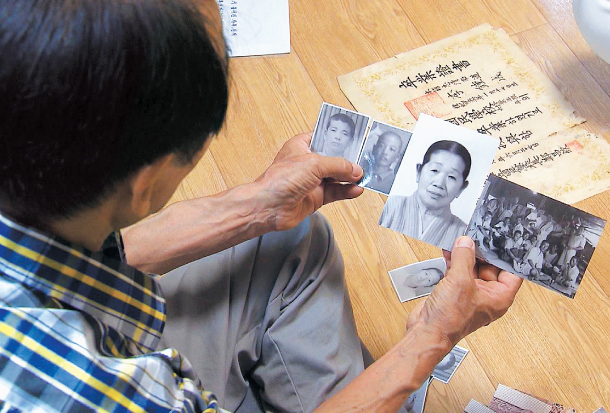 Lee Su-nam looks at pictures of his mother and other family members at his home in Yongsan District, central Seoul, on July 28 as he recalled memories from before the 1950-53 Korean War. [JOINT PRESS CORPS]

When he first heard that his long-lost brother was still alive in North Korea, Lee Su-nam could not believe his ears and asked Red Cross officials several times if it was true.

One week before both Koreas are set to hold a rare family reunion, the 77-year-old still cannot believe that he will finally reunite with his older brother, Jong-song, after nearly seven decades of frustrating and seemingly endless waiting.

“It was like a lie,” Lee said. “At first, I didn’t even share the news with my relatives and friends for fear that it might not turn out to be true.”

Lee is one of 93 South Koreans chosen to join a reunion of families separated by the 1950-53 Korean War. It will be held from Aug. 20 to 26 at a resort in North Korea’s Mount Kumgang.

The reunion, the first of its kind in nearly two years, fulfills one part of an agreement signed by South Korean President Moon Jae-in and North Korean leader Kim Jong-un in April to address humanitarian issues arising from the decades-long separation.

The participants were selected from a total of 500 applicants. That number was later whittled down to 250, and the list was finalized based on age, health and other factors. But it still represents a very small fraction of about 57,000 people waiting to meet their loved ones in the North.

Lee’s family was in Seoul when the war broke out in June 1950. Their hardship started when North Korean troops began indiscriminately recruiting young men after they took over the South Korean capital. Many parents tried to prevent their sons from being recruited. Lee’s parents were no different. Nonetheless, North Korean troops managed to nab Lee’s brother while he was walking near Jangchungdan Park one day.

“People said the [recruits] would gather in an elementary school [before being deployed], so my mother hurried there,” Lee said. “It was the last time that she saw her son.”

Lee’s brother is 10 years older than him. “I saw it all while I was playing around in front of our home,” he recalled. “My brother and mother went out, but my mother came back alone.”

His family has been in anguish ever since. “My mother prayed early in the morning every day with a bowl of holy water in the backyard,” Lee said. “I saw it several times. She did it for 10 to 20 years until she became frail and apparently gave up hope. She prayed for her son to return safely. It was heart-wrenching to see that.”

It was not just his mother but Lee and other family members as well who had almost given up hope. Nearly seven decades had passed since they parted ways, and there were no clues whatsoever as to whether he was still alive.

The fact that he was taken away by North Korean troops in the middle of the war made it harder to be optimistic about any kind of reunion.

Frustrated, Lee did not apply for a family reunion at first, but he still held a glimmer of hope that he might be reunited with his long-lost brother and eventually applied.

Now, he is a few days from meeting him again.

“This is the first time I have had such an overwhelming feeling,” he said. “My parents would be really happy if they were still alive to hear the news.”

Lee doesn’t remember much about his older brother except that he was warmhearted. He sympathizes with the hardship that his brother must have endured after being taken away from his family.

“I feel really sorry for my brother who has had to endure living all alone after losing his family and everything,” he said.

Lee is still afraid that this short reunion could be his last chance to see his brother. He also realizes that there are many other people who have been waiting for decades to see their families again.

“There would be nothing better than if we had a permanent meeting station or something,” he said. “I think this might be the last chance for me ... but the government will continue [these reunions], and I think it should. That is my hope.”

The upcoming reunion will be the first of its kind since October 2015. Both Koreas have held 20 rounds of reunions since the first inter-Korean summit in 2000.