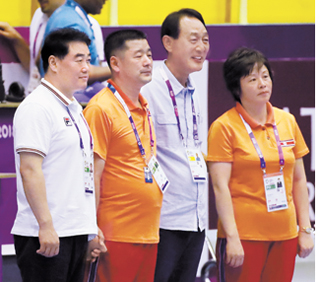 The South and North Korean handball coaches pose for a photo before a preliminary match at the Asian Games at GOR Popki Cibubur in Jakarta on Tuesday. [YONHAP]

Lee made the remark after South Korea defeated North Korea 39-22 in the preliminary action at the Asian Games at GOR Popki Cibubur in Jakarta, Indonesia.

“I think there could be a unified Korean team in women’s handball at the next competition,” Lee said, in reference to the Asian Women’s Handball Championship scheduled for December in Japan.

“I don’t know the details yet, but I understand the International Handball Federation has asked for a joint Korean team,” Lee added. “If the unified team is assembled, I hope it won’t come at the expense of any South Korean players. But if we can compete as one at the Asian championships and win a spot for the world championships, it’d be an honor. The significance would go beyond handball.”

South Korea has been a far stronger handball nation than North Korea, having won six of the seven Asian Games gold medals since the women’s competition was added in 1990. If the Koreas decide to combine their teams, some South Koreans may have to cede roster spots to inferior North Koreans.

“Some North Korean players showed some speed,” he said. “When they saw an opening, they battled hard to exploit that.”

South Korea is trying to defend its Asian Games title. Lee said his players looked a bit sluggish because of the pressure and the circus atmosphere accompanying the first all-Korean showdown in any sport at these Games.

With the distractions behind them, South Koreans can now get back to their business, Lee added.

“I told them before the game that they had to show some fight out there, but I don’t think they had the legs that they normally do,” he said of his players. “We expect to face Japan in the final, and we’ll maintain our composure as we prepare for that.”