Small business given a slew of breaks on taxes

Small business given a slew of breaks on taxes 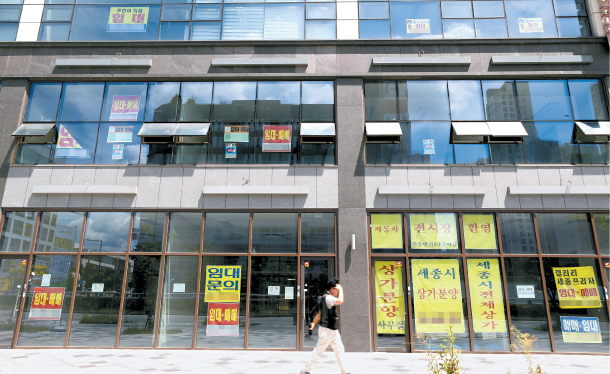 A commercial building in Sejong is plastered with “For rent” ads after small businesses close due to rising costs including labor expenses resulting from two years of minimum wage hikes. [YONHAP]

The government is automatically suspending tax audits of 5.19 million small businesses, such as restaurants and convenience stores, as they struggle to pay staff after the hikes in the minimum wage.

Tax agents will not even check income tax and value-added taxes that small businesses are reporting.

Business owners who are exempt account for 89 percent of the 5.87 million small businesses in Korea.

Additionally, the government is stopping audits on 50,000 small companies with annual revenues of less than 12 billion won or which have fewer than 10 employees. That brings the total number of companies exempt from audits until the end of next year to 5.69 million.

Small businesses that are not eligible include high-earning professional businesses such as private hospitals and law firms as well as real estate brokers and expensive bars.

“[Today’s measure] will have a psychological effect that allows [small business owners] to concentrate on their business activities without worrying about taxes,” said Han Sung-hee, National Tax Service (NTS) commissioner, on Thursday.

The tax agency’s decision came after President Moon Jae-in on Tuesday ordered the government to come up with measures that would ease tax burdens on small businesses.

“Those working in such small businesses take up a large portion of the economically active population, and it is unfortunate that most of their income fails to even reach the level earned by laborers,” Moon said, according to the Blue House on Thursday. “In order to allow these six million small business owners and merchants to be able to focus on their livelihoods, there’s a need to boldly reduce tax-related burdens such as suspending audits or providing exemptions.”

In addition, the NTS will search for businesses that have seen reductions in revenues of 20 percent over the last three months and send a notification that they can request delays for their tax payments.

The NTS said it was pre-emptively moving to find these struggling companies on its own.

The NTS will actively promote a system adopted this year in which the tax agency exempts tax payments of up to 30 million won for entrepreneurs who have gone out of business, landed a new job or started a new business. As of July, 473 individuals benefited from the exemptions, which totaled 7.2 billion won. However, the tax agency made it clear this was a temporary measure to help small businesses that are struggling.

“We will take legal actions against [those using this initiative to commit] tax evasion,” Han said.

The government is preparing more measures to help small businesses which will be announced early next week.

They are expected to include some help on commercial rent as well as reducing the number of businesses that have to pay value-added taxes by raising the annual revenue minimum to be taxed from over 24 million won to over 30 million won.

One of the first moves by the Moon administration was raising this year’s minimum wage by more than 16 percent, which is taking a heavy toll on small businesses. The toll is expected to grow next year when the minimum wage is raised 10.9 percent to 8,350 won.