We must protect our firefighters

We must protect our firefighters 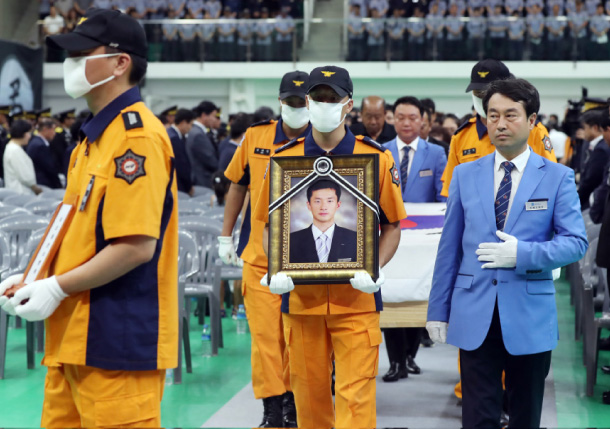 Just like in most countries, firefighters are respected in Korea. In every survey on respectable jobs, firefighters top the list. But the reality doesn’t reflect the public’s praise for them. Their job is extremely hard. According to the Korea National Fire Agency, there were 3.74 million cases of fires, rescues and first aid last year. On some days, individual firefighters were mobilized more than ten times.

And yet, they are treated poorly. Firefighters sarcastically call their risk pay the “price of life,” and it is only 60,000 won (＄53) per month. It used to be 50,000 won in the past, and since an increase was first proposed in 2008, it took eight years to raise it by 10,000 won. The public outcry for improved treatment spreads after news of deaths on duty, but it is soon forgotten. At the National Assembly’s inspection of government agencies last year, it was revealed that unpaid overtime pay added up to 190 billion won. In the past three years, 33 firefighters committed suicide. Many of them felt guilty that they failed to save lives, so they made the tragic choice.

They are also heartbroken, as many of their colleagues fell ill with cancers and other diseases from fighting fires. With no family history and no problems in their regular checkups, they suddenly fall ill with serious diseases. The cause is presumably due to the toxins from fires. However, the Government Employees Pension Service does not recognize these cases as work-related diseases and does not cover their medical costs. Cases are often dismissed and then approved through lawsuits. By the time a Supreme Court decision is made, the firefighter struggling with disease has often died. A firefighter who was in a legal battle to get his cancer recognized as a work-related disease told the JoongAng Ilbo in an interview, “I felt I was abandoned by the country. I used to be proud of my uniform. But now, I wouldn’t recommend anyone to become a firefighter.”

Two young firefighters recently lost their lives. They died while searching for a boat that went adrift. President Moon Jae-in wrote on his Facebook page, “We will never forget the sacrifices of the two firefighters.” All Koreans feel the same. The system should be changed to help those firefighters.

Korea should consider introducing the presumptive cancer legislation for firefighters in the United States, Canada and Australia. When a healthy firefighter falls sick with cancer or other serious illness after being in the field for more than five years, it is presumed to be a work-related illness. When it is suspected that it is not work-related, the state needs to prove it. This is the opposite to Korea, where sick firefighters have to prove that their illnesses were result of their occupation.

This move would boost the spirits of our respected and trusted firefighters. When will firefighters be able to confidently recommend others to follow their path?