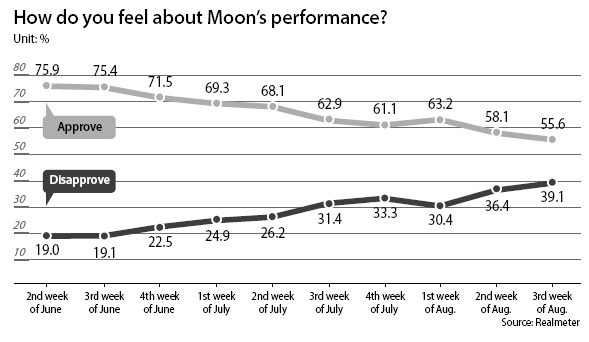 President Moon Jae-in’s approval rating fell 2.5 points to a new low of 55.6 percent this week, according to a poll by Realmeter on Thursday, continuing a two-month decline sparked by discontent with his economic policies.

The latest figure is a precipitous fall from a high of 75.4 percent that Moon experienced eight weeks earlier. The poll was conducted on 1,005 individuals between Monday and Tuesday and has a margin of error of plus or minus 3.1 percentage points.

Moon’s support has been waning since the second week of June after the fervor of optimism over North Korea subsided. Last week, his approval rating fell below the 60 percent level for the first time since he took office in May last year over his handling of Korea’s sluggish economy.

The only bump that Moon received was in the first week of August, when his approval rating slightly rebounded by 2.1 points to 63.2 percent after he vowed to overhaul a controversial military unit that drafted martial law plans during last year’s impeachment crisis. Moon’s low approval rating this week appears to stem from backlash against the government’s plan to raise the pension age to 68.

Currently, anyone who subscribes to the national pension fund can begin claiming money at 62. That age is supposed to increase by one year every five years, so by 2033, the pension age would be 65 under the current scheme.

But with the National Pension Service estimating that funds will be dry up by 2057 amid a rapidly aging population and low birthrate, there were reports last week that the government was considering expediting the age increase to 68 and raising premiums for the first time in 20 years.

The backlash was immediate, with a petition appearing on the Blue House’s website opposing the plan.

To allay public concerns, Moon said on Monday that there would be no change to the pension scheme without the public’s consent, but the damage to his approval rating was already done.

A court ruling on Tuesday that acquitted former South Chungcheong Gov. An Hee-jung of sexual assault against his former secretary for lack of evidence added to the public’s disapproval of the government and the ruling party, Realmeter said in its analysis. An was part of Moon’s Democratic Party before he was kicked out on rape allegations.

The Democratic Party saw its popularity decline to 37 percent this week, down 3.6 points from the previous week. It is the party’s lowest approval rating since the fourth week of January last year, when it was an opposition party.