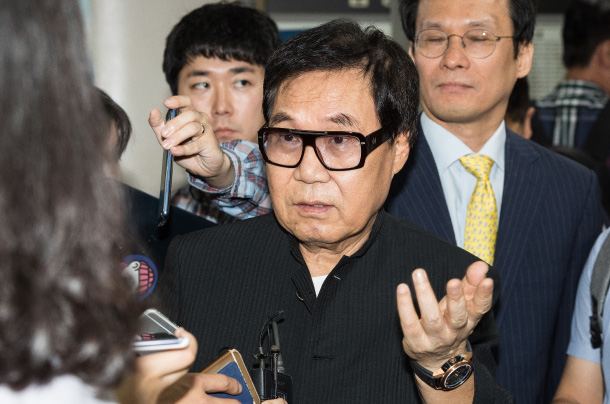 Singer and artist Cho Young-nam, speaks to reporters after he was found not guilty of fraud at the Seoul Central District Court Friday. [NEWS1]

Singer and artist Cho Young-nam was found not guilty of fraud on Friday after a court overturned a decision made in November.

He was given a 10-month prison sentence suspended for two years by the Seoul Central District Court last year for fraudulently selling 21 pieces of art to 17 people and making a total of 153 million won ($136,000) off of the sales. Cho had hired a helper to actually paint the artworks and added only the final touches to each piece in order to call the works his own. But the same court found Cho not guilty in his appeal.

The ruling body decided that the inspiration for the paintings, including the pieces made with images of hwatu, cards used to play the Korean game known as Go-Stop, was indeed Cho’s own, no matter who executed the idea.

The court ruled that the painter hired to execute the idea on canvas cannot be recognized as an artist who contributed to making the artwork, but more like a technician who helped Cho execute his ideas.

The court also denied the argument that Cho should have let buyers know the paintings were done by someone else, saying that the reasons for making a purchase can be different from one buyer to another, so whether Cho actually painted the pieces was not crucial or necessary information to disclose.

“As long as a system that uses helpers and assistants to make an artwork exists in the art world, we can’t call having someone assist in the creation of the work a crime,” the court explained Friday.

The previous ruling found that Cho’s helper, an artist surnamed Song, played more roles than just putting Cho’s idea on canvas, and viewed him as an independent artist instead of just an assistant.

“We found a number of news articles and academic papers saying that some big name artists like Damien Hirst or Jeff Koons at one point had one assistant who helped them out, and sometimes those ‘assistants’ are said to have had better talent than the artists who got to call the finished works theirs,” said lawyer Koo Bon-jin of Lawplex, who worked on Cho’s defense.

“There are many different ways in which artists would apply the work of an assistant, and we have shown that this system of having assistants do crucial work is something seen globally.”

Cho, after the court’s ruling came out, said that he respects the decision.

“The ruling court understood contemporary art in the right way and made the correct decision,” said Cho.

“This incident brought me lots of good things, so I can get more serious about painting.”