For better or worse, rice prices are rising

For better or worse, rice prices are rising 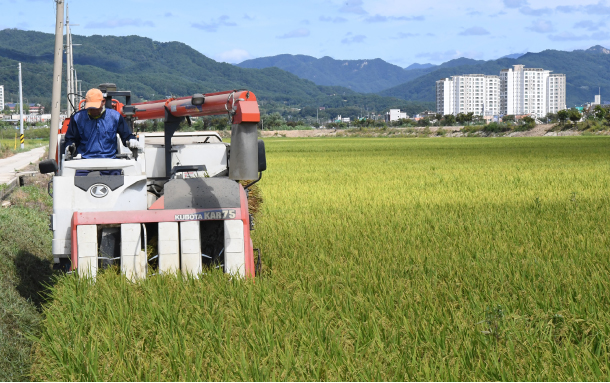 Park Bong-hwa, 55, harvests rice from his field in Yanggu County, Gangwon, on Friday. The farmer decided to harvest his crops 10 days earlier than previous years as the heat and drought continues. [YONHAP]

Rice prices rose 37 percent on-year this July, but they just might get higher.

Why did rice get so expensive?

Last year’s harvest - which makes up much of this year’s rice supply - was smaller than usual. In 2017, 3.97 million tons of rice were harvested across the country, 5.3 percent less than in 2016 when 4.2 million tons were harvested.

Industry experts expect this year’s yield to be even smaller as the prolonged heat wave and lack of rainfall in the summer will likely take a toll on production.

The government also had a hand in raising rice prices, buying huge quantities from farmers to help them recover from falling profit. Rice prices declined for four years in a row between 2013 and 2017 due to stellar harvests during that period.

“It was our priority to recover rice prices that had fallen to levels from 20 years ago,” said the Ministry of Agriculture, Food and Rural Affairs in explaining its decision.

Thanks to the government’s cash injection, rice prices managed to reach the 170,000-won threshold again. But as the sudden price hike startled consumers, the government had to release its emergency rice supply on Aug. 2, pouring 40,000 tons of rice back into the market.

The August release marks the third time this year that the government has poured rice into the market. 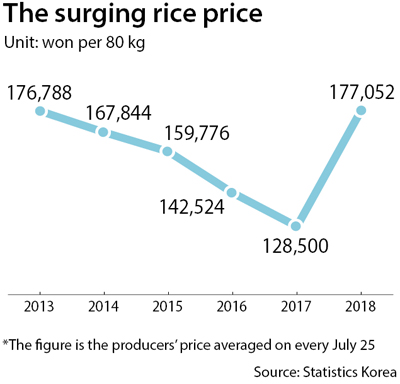 The farming industry views rising prices as a process of normalization after a period of unwanted decline.

Proponents of higher prices point to the need to ensure farmers’ livelihoods amid rising consumer prices.

“The price of one ramyeon package is 800 won while one bowl of rice is around 240 won,” said Jeong Woon-chun of the Bareunmirae Party.

Rice consumption is also decreasing every year. According to Statistics Korea, Koreans consumed 61.8 kilograms of rice per person last year, a 33-year low.

It is one of the Moon Jae-in administration’s agricultural policies to ensure that rising consumer prices are reflected in the price of rice.

The government adopted a subsidy program for rice farmers in 2005 where they set a target price for an 80-kilogram sack of rice every five years and subsidize farmers when the price fails to reach the target. This year, the government has to decide on the target rice price for the upcoming five years.

Some National Assembly members including the Justice Party’s Youn So-ha are pushing for 223,000 won per 80 kilograms, while some farmers’ organizations are calling for 240,000 won.