Aretha Franklin, the ‘Queen of Soul,’ is dead at 76

Aretha Franklin, the ‘Queen of Soul,’ is dead at 76 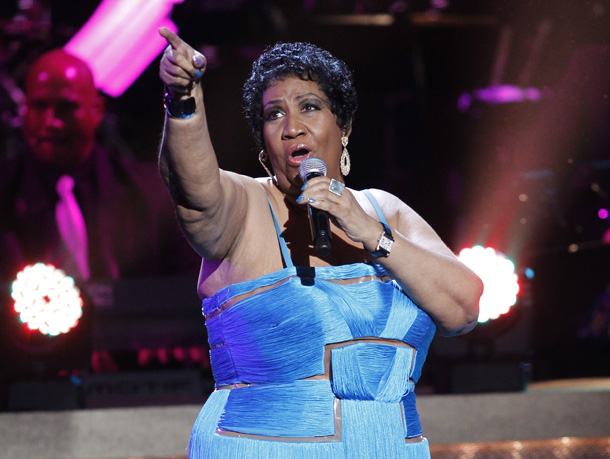 Aretha Franklin performs during the BET Honors at the Warner Theatre in Washington. Franklin died Thursday at her home in Detroit. She was 76. [AP/YONHAP]

Aretha Franklin, the undisputed “Queen of Soul” who sang with matchless style on such classics as “Think,” “I Say a Little Prayer” and her signature song, “Respect,” and stood as a cultural icon around the globe, has died from pancreatic cancer. She was 76.

Publicist Gwendolyn Quinn told The Associated Press through a family statement that Franklin died Thursday at 9:50 a.m. at her home in Detroit.

A professional singer and pianist by her late teens, a superstar by her mid-20s, Franklin had long ago settled any arguments over who was the greatest popular vocalist of her time. Her gifts, natural and acquired, were a multi-octave mezzo-soprano, gospel passion and training worthy of a preacher’s daughter, taste sophisticated and eccentric, and the courage to channel private pain into liberating song.

She recorded hundreds of tracks and had dozens of hits over the span of a half century, including 20 that reached No. 1 on the R&B charts. But her reputation was defined by an extraordinary run of top 10 smashes in the late 1960s, from the morning-after bliss of “(You Make Me Feel Like) A Natural Woman,” to the wised-up “Chain of Fools” to her unstoppable call for “Respect.”

The music industry couldn’t honor her enough. Franklin won 18 Grammy awards. In 1987, she became the first woman inducted into the Rock and Roll Hall of Fame.

Fellow singers bowed to her eminence and political and civic leaders treated her as a peer. The Rev. Martin Luther King Jr. was a longtime friend, and she sang at the dedication of King’s memorial, in 2011. She performed at the inaugurations of Presidents Bill Clinton and Jimmy Carter, and at the funeral for civil rights pioneer Rosa Parks. Clinton gave Franklin the National Medal of Arts. President George W. Bush awarded her the Presidential Medal of Freedom, the nation’s highest civilian honor, in 2005.

Franklin’s best-known appearance with a president was in January 2009, when she sang “My Country ‘tis of Thee” at Barack Obama’s inauguration. She wore a gray felt hat with a huge, Swarovski rhinestone-bordered bow that became an Internet sensation and even had its own website.

Franklin endured the exhausting grind of celebrity and personal troubles dating back to childhood. She was married from 1961 to 1969 to her manager, Ted White, and their battles are widely believed to have inspired her performances on several songs, including “(Sweet Sweet Baby) Since You’ve Been Gone,” “Think” and her heartbreaking ballad of despair, “Ain’t No Way.” The mother of two sons by age 16 (she later had two more), she was often in turmoil as she struggled with her weight, family problems and financial predicaments.

Despite growing up in Detroit, and having Smokey Robinson as a childhood friend, Franklin never recorded for Motown Records; stints with Columbia and Arista were sandwiched around her prime years with Atlantic Records. But it was at Detroit’s New Bethel Baptist Church, where her father was pastor, that Franklin learned the gospel fundamentals that would make her a soul institution.

Aretha Louise Franklin was born March 25, 1942, in Memphis, Tennessee. The Rev. C.L. Franklin soon moved his family to Buffalo, New York, then to Detroit. C.L. Franklin was among the most prominent Baptist ministers of his time. Music was the family business and performers from Sam Cooke to Lou Rawls were guests at the Franklin house. In the living room, young Aretha awed Robinson and other friends with her playing on the grand piano.

Franklin was in her early teens when she began touring with her father, and she released a gospel album in 1956 through J-V-B Records. Four years later, she signed with Columbia Records producer John Hammond, who called Franklin the most exciting singer he had heard since a vocalist he promoted decades earlier, Billie Holiday. Franklin knew Motown founder Berry Gordy Jr. and considered joining his label, but decided it was just a local company at the time.

Franklin recorded several albums for Columbia Records over the next six years. She had a handful of minor hits, including “Rock-A-Bye Your Baby With a Dixie Melody” and “Runnin’ Out of Fools,” but never quite caught on as the label tried to fit into her a variety of styles, from jazz and show songs to such pop numbers as “Mockingbird.” Franklin jumped to Atlantic Records in 1966.

At Atlantic, Wexler teamed her with veteran R&B musicians from FAME Studios in Muscle Shoals, and the result was a tougher, soulful sound, with call-and-response vocals and Franklin’s gospel-style piano, which anchored “I Say a Little Prayer,” “Natural Woman” and others.

Of Franklin’s dozens of hits, none was linked more firmly to her than the funky, horn-led march “Respect” and its spelled out demand for “R-E-S-P-E-C-T.”

Writing in Rolling Stone magazine in 2004, Wexler said: “It was an appeal for dignity combined with a blatant lubricity. There are songs that are a call to action. There are love songs. There are sex songs. But it’s hard to think of another song where all those elements are combined.”

Franklin had decided she wanted to “embellish” the R&B song written by Otis Redding, whose version had been a modest hit in 1965.

In a 2004 interview with the St. Petersburg Times, Franklin was asked whether she sensed in the ’60s that she was helping change popular music.

“Somewhat, certainly with ‘Respect,’ that was a battle cry for freedom and many people of many ethnicities took pride in that word,” she answered. “It was meaningful to all of us.”