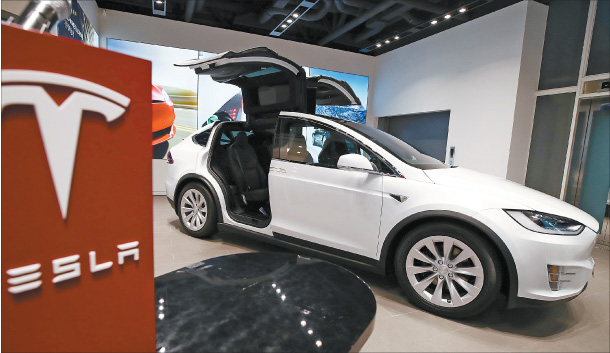 Tesla is launching its sport utility vehicle Model X in the Korean market.

The U.S. carmaker said official sales of the crossover SUV, which retains similar looks to the well-known Model S sedan but with all-wheel drive and space for up to seven adults, will begin in Korea from Aug. 31 during a press event held Friday at a Tesla showroom in Cheongdam, southern Seoul.

The Model X first rolled off the production line in the United States in 2015, but has been unavailable in Korea until now.

The company plans to release the Model X in Korea in two trims: 75D and 100D. The cars are named after their battery capacities. Tesla only introduced detailed specs for the larger 100 kilowatt hours battery trim on Friday.

The Model X 100D can travel up to 386 kilometers (240 miles) per charge. The car, which can draw on a maximum 262 horsepower, can reach speeds of 100 kilometers per hour in just 4.9 seconds, according to the electric car maker.

One notable feature of the SUV is the falcon wing doors that open straight up like actual wings. According to Kim Jung-ho, a product specialist at Tesla Korea, the wing-like design of the door makes it easier for consumers to hop in the back of the car, even when it is stuck in a narrow parking space.

The SUV is equipped with 12 airbags that come in five different types depending on where the airbag is installed and so-called active safety features that can prevent drivers from crashing with other cars by partially auto driving.

Tesla says it is the first SUV to have obtained five stars in all safety tests run by the U.S. National Highway Traffic Safety Administration.

While the American company has been receiving preorders for the SUV since August 2016, it will ask customers to confirm their orders from Friday before beginning online sales.

Delivery will begin from the fourth quarter of this year for customers who preordered the 100D trim. Delivery of preordered 75Ds will begin next year.

Customers who purchase the SUV through online sales at the end of the month will also start receiving cars from next year.

The 100D trim carries a price tag of 134.9 million won ($120,000) and the 75D costs 113.9 million won excluding subsidies offered by the Korean government. While the government has been giving out subsidies to support sales of eco-friendly cars, Tesla said it will disclose plans related to government subsidies later.