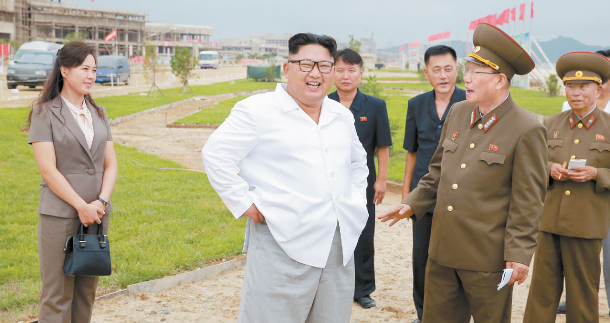 Kim’s remarks in the Korean Central News Agency (KCNA) came shortly after the U.S. Treasury Department announced new sanctions on one individual and three organizations accused of being involved in facilitating illicit shipments on behalf of North Korea. While announcing the sanctions on Wednesday in Washington, U.S. Treasury Secretary Steven Mnuchin said the measures will remain in place until North Korea achieves “final, fully verified denuclearization.”

KCNA did not give a precise date for Kim’s visit to the tourism area. But North Korean media usually reports on the leader’s activities a day later for reasons of security, which would mean the visit occurred Thursday.

“Such a huge and grand creation campaign as the construction of the Wonsan-Kalma coastal tourist area is an acute standoff with hostile forces trying to stifle the Korean people through brigandish sanctions and blockade,” Kim said in an English version of the KCNA report, “a do-or-die struggle to defend the prestige of the [Workers’] Party and a worthwhile struggle for creating the happiness of the people.”

Kim said that if construction work on the site was completed “at such a difficult time as now,” the “single-minded unity of the Party, army and people will be displayed to the whole world once again.”

North Korea has been trying to use the recent rapprochement with South Korea and the United States to get sanctions lifted or ignored by its close - but very few - allies.

Japan’s Kyodo News reported Thursday that North Korean Vice Premier Ri Ryong-nam and Vice Foreign Minister Choe Hui-chol arrived in Beijing on a plane, though North Korean media has yet to confirm the matter. The high-ranking officials were reportedly escorted to a Chinese government vehicle at Beijing Capital International Airport.

The duo is assumed to be headed toward Indonesia. KCNA reported Thursday that a high-level delegation led by Ri left Pyongyang that day to take part in the opening ceremony of the 18th Asian Games, set to be held in Jakarta today.

Indonesia wanted to host a summit between South Korean President Moon Jae-in and Kim Jong-un during the Games, and relayed an invitation to both leaders over the past months, but Pyongyang said that Kim would not be able to attend due to his “political schedule.”

With that, the Blue House decided Moon wouldn’t attend either. Prime Minister Lee Nak-yon is going on his behalf.

Choe Ryong-hae, North Korea’s vice chairman of the Central Committee of the Workers’ Party, was reported by Cuba’s official news agency as having arrived on the island Wednesday for a working visit to strengthen bilateral ties.

Rodriguez was said to have agreed to “highlight the bonds of brotherhood and fraternity that unite peoples, parties and governments.”