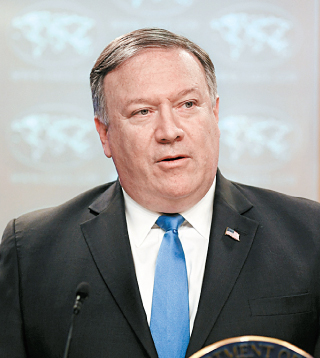 U.S. Secretary of State Mike Pompeo said Thursday he was hoping for a “big step” in progress with North Korea on denuclearization, raising hopes for some kind of breakthrough in the seemingly stalled Pyongyang-Washington talks.

When asked by President Donald Trump how things stood with North Korea during a White House cabinet meeting, Pompeo recounted a series of achievements with the Kim Jong-un regime this year and said his team was “continuing to engage in conversation with them about a path toward a brighter future for the North Koreans.

“So continuing to make progress and hoping that we can make a big step here before too long,” Pompeo said.

The top American diplomat is expected to visit Pyongyang in the coming days.

At the cabinet meeting, Pompeo cited the fact that there have been no missile and nuclear tests by the North Koreans since last November and mentioned the repatriation of 55 sets of remains of American soldiers killed in the 1950-53 Korean War earlier this month as part of the Trump administration’s North Korea policy achievements.

He also noted the American officials were working on bringing home remains of “not dozens, but hundreds” of more American soldiers buried in the North.

Pompeo is expected to make his fourth trip to the North Korean capital of Pyongyang in the coming days, possibly by the end of August, to flesh out details of a denuclearization deal the North vaguely promised in the June 12 Singapore summit joint statement.

The North committed itself to “work toward complete denuclearization of the Korean Peninsula” while the U.S. agreed to “establish new U.S.-DPRK relations in accordance with the desire of the peoples of the two countries for peace and prosperity.”

South Korean President Moon Jae-in said Thursday that dialogue between Pyongyang and Washington was progressing at “an unprecedented pace” and that “there have been many more talks and contacts” between the two “than publicly reported.” He did not elaborate on those unreported meetings.

North Korea seems to be demand the U.S. agree to declare a formal end to the Korean War in exchange for surrendering a list of its nuclear stockpile and related facilities as a way of guaranteeing its regime security.

Pyongyang said adopting such a declaration is the “demand of the times” and that the “responsibility and duty” fell on the U.S. to do so in an opinion piece carried by the state-run Rodong Sinmun Friday.

A government official said Pompeo would meet with North Korean leader Kim Jong-un during his upcoming visit, according to a report by broadcaster JTBC Thursday. Contrary to earlier expectation, Kim did not meet Pompeo on his last three-day visit to Pyongyang in early July, fueling speculation the North Koreans were at odds with the Americans over denuclearization steps.

The Blue House on Friday welcomed the positive atmosphere in respect to the denuclearization talks.

“It appears that there is a change in the North-U.S. relations [from the stalled pace of talks] with a positive atmosphere. We hope it will lead to an outcome,” said a senior presidential official.