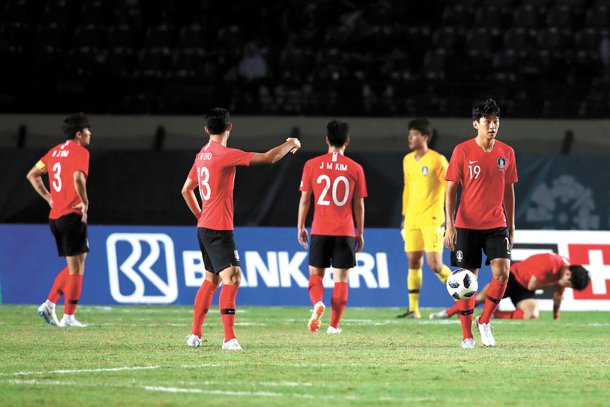 The Korean national football team reacts after losing 2-1 to Malaysia in their Group E match at the 2018 Asian Games at Si Jalak Harupat Stadium in Bandung, Indonesia, on Friday. [YONHAP]

Korea is likely to travel a bumpy road in their Asian Games men’s football title defense after suffering a shocking defeat to Malaysia on Friday.

The Korean under-23 national football team fell 2-1 to Malaysia in their Group E match at the 18th Asian Games at Si Jalak Harupat Stadium in Bandung, Indonesia. It was Korea’s first loss to Malaysia in 44 years after a 3-2 defeat at the 1974 Asian Games in Tehran.

It was also the Taeguk Warriors’ first loss in 10 Asian Games matches. Korea won the 2014 Asian Games in Incheon without dropping a match. They conceded no goals on that gold medal run.

The latest loss not only dented Korea’s top dog status in the competition, but it also made their tournament journey more difficult

The men’s football competition features 25 teams in six groups. The top two teams from each group and four best third-placed teams will advance to the round of 16.

Korea is now second in Group E with one win and one loss. They blanked Bahrain 6-0 in their opening match Wednesday.

Malaysia is the leader of the group with two wins. Kyrgyzstan and Bahrain are tied at one draw and one loss, but the former sits in third place with a better goal difference.

Korea will next face Kyrgyzstan to wrap up their group stage campaign on Monday. Getting a draw against Kyrgyzstan will be enough for Korea to enter the round of 16, but no Korean fans would welcome that result.

Korea could even face elimination if they lose to Kyrgyzstan and Bahrain edge Malaysia in their final group stage match.

The biggest problem from the Malaysia shock is that Korea will not be able to win the group.

If Korea and Malaysia both win their final group matches, they will each end up with two wins and one loss, but Korea would place second because of Friday’s loss.

When two teams are tied in points, their head-to-head record is the first tiebreaker.

Finishing second in the group means that Korea will take a tougher road to the final.

The Group E runners-up will have to face the Group F winners in the round of 16. Iran and Saudi Arabia are currently vying for the top spot in Group F.

Both teams are considered tough opponents for Korea. And even if Korea advance to the quarterfinals, they’re likely to meet Uzbekistan, the winners of the 2018 Asian Football Confederation (AFC) U-23 Championship and one of the top gold medal contenders at this year’s Asian Games.

The best case scenario for Korea was to win the group and face relatively easy opponents in the knockout stages.

Having failed to secure the top seed, Korea will also face a tighter schedule than they would have liked.

The Group E runners-up will have a three-day break before playing their round of 16 match. But Group E winners Malaysia will enjoy four days off.

Korea will also have to travel more for their knockout stage matches.

If Korea finish in second place in Group E, they will have to play their round of 16 match at Wibawa Mukti Stadium in Cikarang, west of Jakarta. For the quarterfinals, they move to Patriot Chandrabhaga Stadium east of Jakarta, and for the semifinals and final, they need to go to Pakansari Stadium in Bogor, south of Jakarta.

The Group E winners have a relatively easy schedule as they can have their round of 16 match at Patriot Chandrabhaga Stadium in Jakarta and play at Pakansari Stadium from quarterfinals to final.

For Korean footballers, including Son Heung-min, the Asian Games are an important tournament because exemption from mandatory military service is at stake.

Male athletes with Asian Games gold medals can be exempted from their military service, which is about two years long, and extend their club career without interruption.

After the stunning loss to Malaysia, head coach Kim Hak-bum admitted that his squad rotation didn’t work and vowed to regroup. For the match against Malaysia, Kim changed six players from the starting lineup that was used against Bahrain.

Son, who played against Malaysia as a second-half substitute, said he also feels responsibility for the humiliating loss.