Korea’s dreams of wushu gold start to come crashing down

Korea’s dreams of wushu gold start to come crashing down 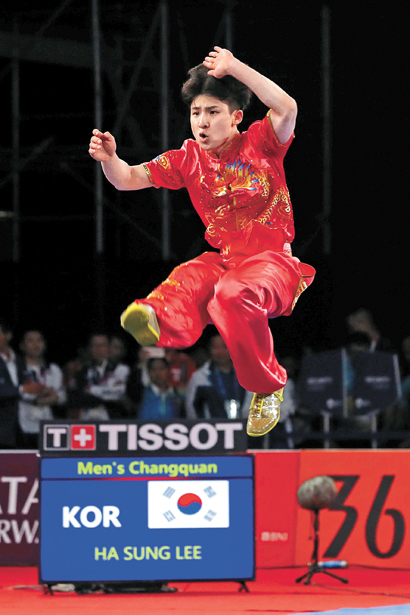 Lee Ha-sung performs his changquan routine at the Jakarta International Expo in Jakarta on Sunday. [NEWS1]

Lee Ha-sung failed to defend his title in wushu men’s changquan, finishing the event in 12th at the 2018 Asian Games on Sunday.

Lee hoped to win Korea’s first gold medal at the 2018 Asian Games but instead left without a podium finish after making a mistake in his landing. Lee received 9.31 points for his performance, .44 points behind Sun Peiyuan of China, who took gold. Edgar Xavier Marvelo of Indonesia won silver and Tsemin Tsai of Taiwan won bronze.

Wushu, a collective term for traditional Chinese martial arts, has been part of the Asiad since the 1990 Beijing Games. Wushu is competed in two different categories - fighting or performance. The performance events, where an athlete performs their entire routine without interruption like a gymnast, are broken into four different disciplines - changquan, nanquan/nangun, taijiquan/tajijian and daoshu/gunshu. In the women’s event, daoshu/gunshu is replaced with jianshu/qiangshu.

Lee, who started learning wushu at age nine, competed in the changquan event. Changquan, literally “long fist” in Chinese, is a traditional form of wushu that is thought to date back to the Song Dynasty (960-1279).

At age 19, Lee won a surprise gold medal in the event at the 2014 Incheon Asian Games. He continued his success on the international stage by winning gold at the 2015 World Wushu Championship.

Korean athletes first competed in wushu at the 1994 Asian Games in Hiroshima, going on to win a total of 18 medals over the past six Asiads - three gold, six silver and nine bronze. Unsurprisingly, China dominates the wushu medal standing, having won a total of 65 medals - 53 gold, eight silver and four bronze.

However, wushu is not an official Olympic sport.

Lee is not the only Korean to have already lost a chance of medaling at this year’s Asian Games in wushu. In women’s jianshu/qiangshu all-round event on Sunday, Seo Hee-ju withdrew due to a knee injury during training.

“While in the process of practicing my last movement [in my routine], something went wrong in my knee,” Seo said. “I was going to compete even though I felt pain but since my coach stopped me, I had to withdraw.”

At the 2014 Asian Games, Seo won a bronze in women’s jianshu/qiangshu, becoming the first female Korean wushu competitor to medal in the performance category. Just like Lee, Seo continued her success at the 2015 World Wushu Championship by winning gold in women’s jianshu. With a strong 2017 season, winning another gold in jianshu and a silver in qiangshu at the World Championship, Seo quickly became a medal hopeful for the Asian Games.