A nation of gamers is ready to be recognized: Known all over the world for their dominance in computer games, Koreans are still pushing for their hobby to be seen as a true sport

A nation of gamers is ready to be recognized: Known all over the world for their dominance in computer games, Koreans are still pushing for their hobby to be seen as a true sport 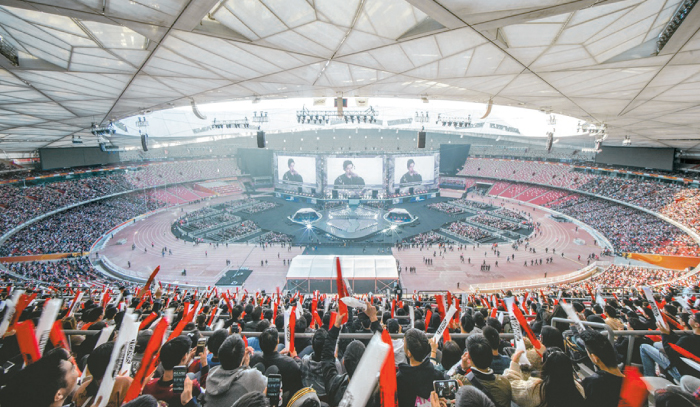 Thousands of people gather at the final round of the League of Legends World Championship 2017 in Beijing, China, on Nov. 3. The match was against two Korean teams, SK Telecom T1 and Samsung Galaxy. Some 58 million people tuned in live to watch the game online on streaming platforms. [YONHAP]

“The Land of the Morning Calm has mastered the art of war, and emerged as the home to the most renowned StarCraft players on Earth. Do not arrive idle to this melee,” reads the introduction of the Korean server for the multiplayer video game StarCraft, which was remastered in August 2017.

When the game, first released in 1998 by publisher Blizzard Entertainment, was re-released last summer, the hearts of Korean gamers were filled with pride after being recognized by the game’s developers. After all, the most famous StarCraft players who had earned the support of millions of fans of the game around the world had been Korean, including legendary names such as Lim Yo-hwan, Hong Jin-ho, Song Byung-gu, Ma Jae-yoon and Lee Yun-yeol.

It’s no secret that Koreans are good at computer games, so much so that anyone who plays online games is well aware that Koreans are not to be messed with when it comes to battling with the mouse and the keyboard, not just StarCraft. The newest and most popular games such as Riot’s League of Legends, Blizzard’s Overwatch and Bluehole’s PlayerUnknown’s Battlegrounds are also dominated by Koreans, with world championship tournaments often featuring Korean-versus-Korean match-ups.

While professional gamers shoot up the international ranks and hobbyists crush their opponents with wit and skill, gaming is still considered by many to be unproductive and useless, with some even going so far as to deem gaming harmful to the mind and body. E-sports has been selected as an exhibition game for this year’s Asian Games, but many still find it hard to see gaming as a legitimate sport equal to any other, despite its popularity.

Even though the gaming population may not be embraced in Korea, it is perhaps home to the largest percentage of people who do play - in closed-off sanctuaries known as PC bang. There, people play games and hang out with their friends. It is also where Korea’s digital warriors are born. 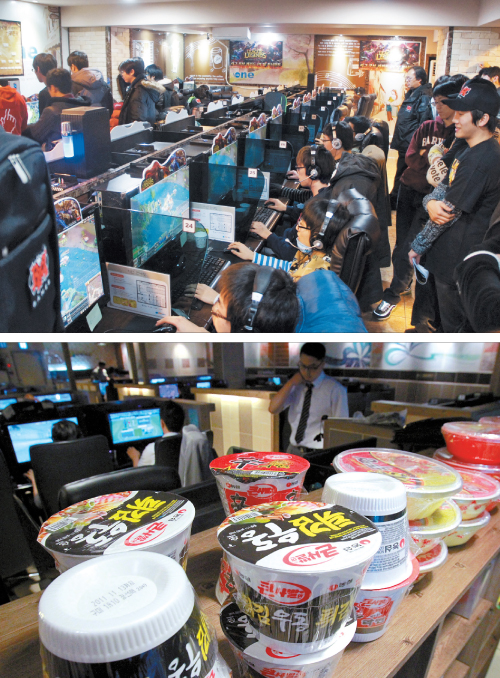 In Korea, a unique culture has evolved around what are known as PC bang, which is unlike any other in the world. A PC bang is, in the most literal sense, a personal computer (PC) room (bang). But a PC bang is more than just a computer room or an internet cafe. A common PC bang has over 100 computers, all tricked-out with top-notch gadgets that offer an optimal gaming experience.

The biggest charm of a PC bang is that customers can come in and use high-end computers at a cheap price. Across the country, the average price for an hour at a PC bang is 1,000 won ($0.90) - it may cost a little more in urban areas and a little cheaper in the countryside. But no PC bang charges its customers more than 2,000 won an hour.

While a common household desktop computer costs around 600,000 won, including the cost for the screen, keyboard and mouse, one computer station at a PC bang costs at least double that amount. Equipped with the latest graphic card models and a processing unit, these computer can handle any game users wish to play. According to Lee Sang-hwa, who opened up a premium PC bang with 200 computers in Namyangju, Gyeonggi, each computer costs at least 1,200,000 won and can go up to 1,500,000 won for the most expensive ones.

“Our computers cost double an ordinary computer does, and even the keyboard, the mouse and the chairs are expensive. Since people play different games that look best on different screens - some go well with wider screens and some look better on curved screens - we have to have them all to satisfy people’s needs,” said Lee.

What makes it a true sanctuary though, is that people can literally stay all night long at a PC bang without stepping outside for a meal. Every PC bang sells rice, noodles and snacks that people can order from their seats and have delivered to them so that they are undisturbed during their stay, barring the occasional visit to the bathroom.

“The four of us have been here since 1 [p.m.] and these two [standing in the back] have been here for a few minutes, since there no seats,” said 14-year-old Kim Dong-hoon at around 4 p.m. on a recent Saturday afternoon. “We have a KakaoTalk [messaging app] chat room with 11 people from our class at school. Whenever we want to go to a PC bang, we ask who can go and then go together, because it’s no fun on your own. We took pictures of us at the library and came here. My mom thinks I’m studying.” Next to Kim’s keyboard was an empty pot of ramyeon (instant noodles) that he described as “lunch.” 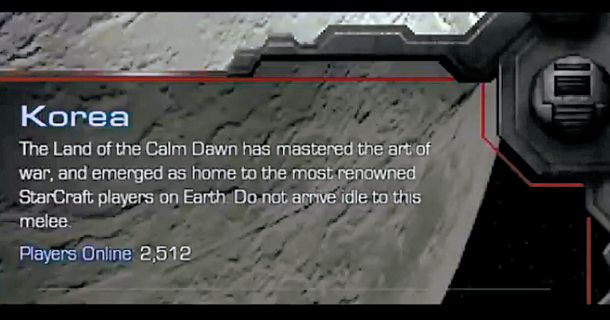 Blizzard Entertainment wrote a special introduction for the Korean users in its remastered version. [SCREEN CAPTURE]

According to Statistics Korea, more than 90 percent of Korean students under the age of 20 play games, either on their computer or their smartphones. Of that enormous population, many frequently watch professional gamers battle each other not only online, but also in live arenas to watch teams play against each other.

This year’s League of Legends World Championship games will be held in Korea from Oct. 1 to Nov. 3 in Seoul, Busan, Gwangju and Incheon. When the final game of the championships was held last year in Beijing, some 57.6 million people streamed the game to watch two Korean teams - SK Telecom T1 and Samsung Galaxy - play. The 2017 championship game garnered a total of 1.2 billion views during the month and a half it took place from Sept. 23 to Nov. 4.

The final match of the League of Legends Championship Korea, held every spring and summer, frequently sells out the 10,000 tickets available regardless of the final contestants.

The biggest recognition for e-sports as a sport and not just a meaningless computer game is the 2018 Asian Games, in which six computer games have been added as a demonstration sport: three team events - League of Legends, Pro Evolution Soccer 2018, Arena of Valor - and three individual events - StarCraft II: Legacy of the Void, Hearthstone and Clash Royale. This is the first time e-sports have been included in an international sporting event, and the International Olympic Committee (IOC), along with the Global Association of International Sports Federations, hosted the “Esports Forum” on July 21, to talk about e-sports’ potential as an official Olympic sport.

“The ‘Esports Forum’ was a unique opportunity to hear from a wide variety of stakeholders, including some of the top players themselves,” said IOC Sports Director Kit McConnell at the forum. “There was a consensus that future collaboration will be based on ensuring that any activity supports and promotes Olympic values; and while the goal was not to develop a pathway towards the inclusion of e-sports on the Olympic program, we have a plan for ongoing dialogue and engagement, and are in a strong position to coordinate and support the wider engagement of the Olympic Movement with e-sports.”

A Long Way to Go

There are over 11,000 PC bang in Korea. On the weekends, almost all of them are packed with people waiting for a seat, and Lee, the PC bang owner, has counted up to 500 people coming to his 200-computer PC bang on public holidays.

According to the Korea Creative Content Agency (Kocca), the PC bang market drew in a total of 1.47 trillion won in 2016 and is expected to have raked 1.51 trillion won in 2017. It isn’t expected to rise much in the upcoming years, but will do so at a steady pace. “As fast-changing as the gaming industry is, PC bangs are quickly catching on to the latest trend by adding cafes to their business or by implementing payment machines for efficiency,” said an official from Kocca.

Korea undoubtedly has the best pool of players in the world, but the general public still believes that games are harmful and that those who like games are immature and irresponsible. While a vast majority of the young people enjoy playing games, their parents are eager to keep them away from the computer screens.

Why does Korea have such a flourishing gaming culture like nowhere else in the world, and yet condemn it? According to Prof. Wi Jong-hyun, business professor at Chung-Ang University, it goes back to before 2014 when the government implemented the so-called Four Addiction Laws, when it categorized games as an addictive hazard along with drinking, smoking and gambling. According to Prof. Wi, people have long been suspicious of gaming in general.

“That’s when Korean people started putting gamers in the same category as drug users,” said Wi. “By putting gaming along the same line as drugs and gambling, the law planted a seed of self-remorse in game developers. The law basically stated that games are just as bad as cigarettes, drugs and alcohol. It took a huge toll on not just those devoted to the industry but the industry itself.”

It may not be welcomed by the public, but its potential is still massive. Lee Jae-hong, a professor at Soongsil University and the current president of the Korea Game Society, believes that by taking a different tone towards the game industry, it could develop into something much bigger, probably big enough to lead Korean industry as a whole.

“We don’t have many resources in Korea, which is why we have to survive the fourth industrial revolution with our brains,” said Lee. “Humans, in nature, like playing and games. And because we’re becoming more digitalized, the convergence of the two into a digital gaming culture will become stronger and diverse. We have a special DNA for gaming, the ability to control our culture and the intellectual power.”

With more lenient laws in favor of the PC bang industry and business owners, the PC bang industry, as well as the gaming industry as a whole, is likely to flourish in the future. “Many parents don’t like to see their children at PC bang because they think it’s either dangerous or not educational. But it’s much safer than wandering the streets at night, and we keep a close eye on whether the children are playing inappropriate games or not. People need to change their perspective towards PC bang, but it starts with government efforts.”