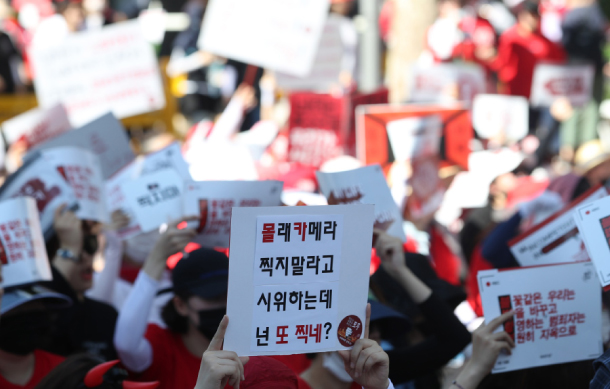 A sentence of 10 months in jail for a woman who took a photo of a male nude model and posted it online sparked a fierce backlash among young women in their 20s. They argue that similar cases where the perpetrators were men — far more common than by women — ended with probation. This generation of young women initiated the Hyehwa Station and Gwanghwamun protests calling for the same punishment for the same crime. The generation that grew up on social media are furious about Korea’s unfiltered misogyny.

Digital verbal misogyny is older and not limited to the far-right online site Ilbe, which is considered the ringleader. In the past, postings deriding Korean women in general were often found on Agora on online portal Daum, which is considered a liberal sanctuary. The comments sections on Naver is also a hotbed of misogyny, even on articles where women are victims. On the news of a woman brutally murdered by Oh Won-choon in 2012, the victim’s family had to publicly ask online trolls to stop posting malicious comments.

Brazen hate speech was a subculture, but in the digital era it spread into our daily lives. Women that grew up online have been exposed to misogyny for their whole lives. Outrage over unrestricted misogyny exploded through Megalia in 2015, and misogyny and misandry began to be seriously discussed. Megalia forced this discussion by mirroring misogynistic tactics, so women have learnt that this approach works.

Of course, Womad distributing the photo of a male nude model is far more violent than Megalia and cannot be defended. But will shutting down Womad and Ilbe solve the problem? Womad is mirroring not just Ilbe but all digital misogyny. Unless a system is imposed to restrict discriminatory hate speech, at least at school as in Western countries, and fundamentally get rid of the original problem, shutting down Womad will only bring about another radical site.