[Test drive] New Tucson is filled with tech. Most of it works.

[Test drive] New Tucson is filled with tech. Most of it works. 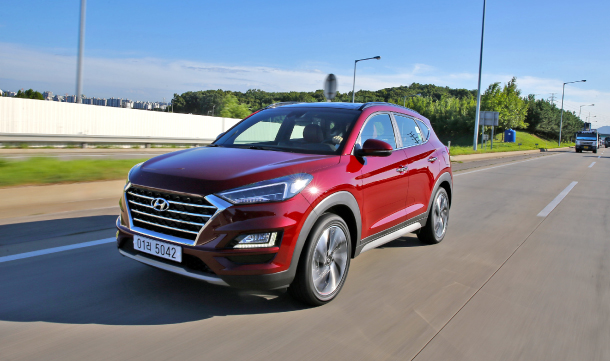 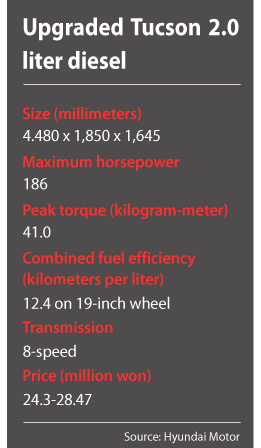 GOYANG, Gyeonggi - The latest version of Hyundai Motor’s Tucson is more stylish and high-tech than its three-year old predecessor, but the latest features come with a surprisingly steep learning curve.

The midsize sport utility vehicle is one of Hyundai’s best-selling SUVs alongside the larger Santa Fe. According to Hyundai, presales of the new edition surpassed 3,800 in the ten days since orders opened on Aug. 7.

The new cascading grille design and full LED headlights gives the SUV a more polished look, but other design changes have been minimized to stay true to the original Tucson feel. The real update is less visible - the Tucson performs better and is packed with more smart technology than preceding models.

When the Korea JoongAng Daily got behind the wheel of a 2.0-litre diesel-fueled Tucson on Friday for a roughly 40-kilometer test drive from Goyang to Yangju, Gyeonggi, a series of driving assistance features as well as a Google-based Android Auto infotainment system caught the reporter’s eye.

When the car veered slightly to the left, coming close to crossing into the next lane - an unconscious effort to avoid big trucks speeding along the other side - the Tucson immediately noticed that the vehicle was drifting across lanes and beeped to alert the driver. The car even automatically corrected the steering to move back into the center of the lane.

Hyundai has included the lane keeping assist feature as standard in all trims of the SUV along with forward collision-avoidance assist and driver warning systems, the most frequently used driving assistance features that were formerly offered as options for at least 600,000 won.

Fortunately - if that’s the right word - there was a chance to try out the forward collision-avoidance assist after the cars ahead suddenly slowed down as this reporter was speeding up to change lanes. The assistant worked well and helped the vehicle slow down fast enough to avoid disaster.

What did not work as well as expected, however, was the newly embedded Android Auto app. The Google-developed app mirrors features from an Android smartphone on a car’s in-dash display and enables users to operate the voice-powered Google Assistant while driving. It was made available for all Hyundai cars with a navigation display in July.

The app is theoretically capable of a lot of things such as offering navigation services using KakaoNavi and making calls to friends via voice command. Unfortunately all those features are only accessible if the app likes the sound of your voice.

Every time this reporter asked the app to find the way to the nearest gas station, it politely apologized because it didn’t understand the command. Sometimes the AI got bolder, attempting to respond with random sentences or proverbs that nobody in the car understood.

It wasn’t all terrible - the AI did manage to turn on some music and send a text message, but the reporter had to speak slowly and clearly and the whole experience was distracting and not conducive to safe driving.

In terms of general driving performance, it was mostly a comfortable ride. Speed transitions were soft and smooth even with continuous corners thanks to the eight-speed transmission newly added to the 2.0-litre diesel trim. On previous Tucsons, the trim had a six-speed transmission.

The most fuel efficient trim is the 1.6-litre SmartStream diesel engine developed by Hyundai to meet Euro 6 emissions guidelines. It is advertised to offer 16.3 kilometers per liter.

While the car comes in three trims, the price of the most fuel efficient starts at 23.81 million won ($21,000). The more powerful 2.0-litre diesel trim begins at 24.3 million won, while the gasoline model starts from 23.51 million won.