Families gather ahead of South-North reunions

Families gather ahead of South-North reunions 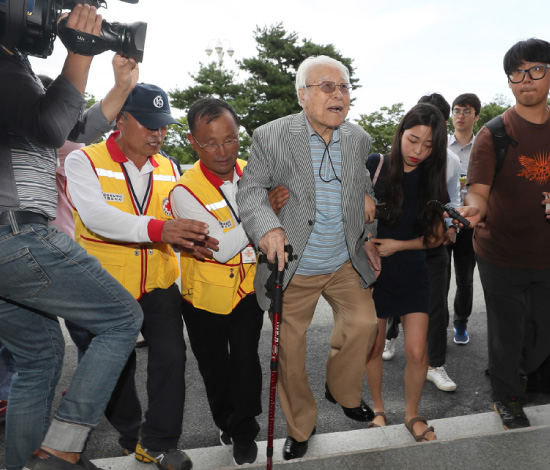 Baek Sung-hyu, 101, the oldest participant in the family reunions that begin today in North Korea, checks into the Hanwha resort in Sokcho, Gangwon, on Sunday. [JOINT PRESS CORPS]

South Koreans separated from family members in North Korea gathered in the coastal city of Sokcho, Gangwon, on Sunday to prepare for a trip to North Korea’s Mount Kumgang resort where the first family reunion in nearly three years will be held starting Monday.

This week’s family reunion is a follow-up to the April 27 Panmunjom Declaration, in which President Moon Jae-in and North Korean leader Kim Jong-un agreed to hold family reunions as part of efforts to improve inter-Korean ties.

The last family reunion took place in October 2015 when the Koreas enjoyed a thaw in relations, which collapsed three months later with the North’s fourth nuclear test in January 2016.

In a retaliatory move, the South withdrew South Korean businesses from the joint Kaesong industrial complex in the North the following month, leading to the closure of the last remaining remnant of inter-Korean economic cooperation and bringing the relationship to a new low.

The 89 families will cross the border Monday morning and meet their family members for the first time in more than six decades at around 3 p.m. at the Mount Kumgang resort.

Baek Min-jun, 92, was hoping to be reunited with his son, but was informed that he had already passed away. “I wanted to see my son first. But I learned that he had died before me,” Baek said in Sokcho. He will meet his daughter-in-law and grandson for the first time.

Lee Keum-sung, also 92, said she was going to meet her son, whom she was separated from at the height of the 1950-53 Korean War.

She told a member of the press corps that she lost sight of her son and husband while she and her family were escaping from the North. She made it to the South with her daughter, who was on her back as a baby.

“I want to ask my son who looked after him as a mother figure,” Lee said.

The oldest South Korean is Baek Sung-kyu, 101, who will meet his daughter-in-law and granddaughter during the three-day event.

The two Koreas have held a total of 20 in-person family reunions and seven video reunions since 2000 when the first inter-Korean summit of President Kim Dae-jung and North Korean leader Kim Jong-il, father of Kim Jong-un, was held in Pyongyang. A total of 4,677 South and North Korean families, or 23,519 people, have been reunited over the past 18 years.