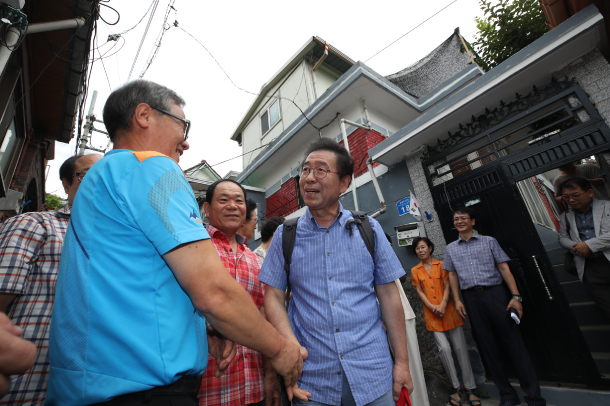 Seoul Mayor Park Won-soon, right, shakes hands with his former neighbors in Gangbuk District, northern Seoul, as he moves out of his temporary home of one month on Sunday. [YONHAP]

Seoul Mayor Park Won-soon vowed to focus on developing the Gangbuk District of northern Seoul for the next four years as his one-month stay in a rooftop house in the area came to an end.

“My one-month stay in Samyang-dong among the locals helped me see their struggles up close,” Park said Sunday in a public conference at the Gangbuk Culture and Arts Hall. “For at least another four years, I will create momentum for balanced development across Gangnam and Gangbuk districts.”

Park, in a campaign pledge during the local elections in June, vowed to live in Gangbuk for a month to experience locals’ lives before coming up with development policies for the district and other underdeveloped areas. In his presentation to the public on Sunday, Park emphasized the wealth and social welfare divide between districts north and south of the Han River.

As one measure to counter the divide, the Seoul city government will be installing four additional railroads in areas outside of Gangnam, with a plan to start construction before 2022. Two will be located in northeastern Seoul and the other two in southwestern Seoul.

“The city government will be reviewing untraditional transportation means, such as monorails, which will help elderly citizens reach their homes in the area, usually located uphill,” the city government said in a statement Sunday.

The city government will also buy 1,000 unoccupied houses in districts outside of Gangnam and renovate them to offer them under favorable conditions to newlyweds as a way of vitalizing underdeveloped parts of Seoul.

“We will help connect local businesses to local demands for urban development or housing construction,” said the city government. “The city government will also be designating more land in northeastern Seoul and southwestern Seoul to be used for commercial purposes.”

It will also be connecting universities, most of which are not located in Gangnam, to local high schools to run programs to help students discover their strengths and plan their careers.

“It’s not only in Seoul that the local economy is struggling,” Park said. “This is a phenomenon across Korea and across the world. Seoul will take the lead in finding a solution.”