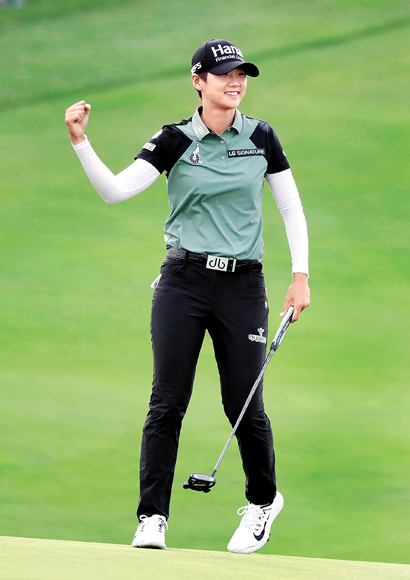 Park Sung-hyun picked up her third win of the season by defeating Lizette Salas of the United States in the first playoff hole of the Indy Women in Tech Championship at Brickyard Crossing Golf Club in Indianapolis, Indiana, on Sunday.

Park, who started the final round two shots behind the leader Salas, shot a bogey-free round of four under par, 68, in the final round to tie for the lead at 23 under par with Salas. Park overcame the two-shot deficit in the back nine. Up until the first half, Salas maintained her two-shot lead, she made a bogey on par-5 10th and Park made a birdie on the same hole, so the two quickly tied for the lead.

However, Salas quickly regained her lead with birdies on the par-4 11th and par-4 13th. But Park didn’t give up. A birdie on par-5 14th allowed Park to get behind Salas by just one shot. Once Salas made a bogey on par-4 17th, the two were once again tied for the lead, forcing the tournament into a sudden-death playoff.

In the first playoff hole, both Park and Salas hit the fairway, and it all came down to putting. While Salas left herself an uphill putt, Park set up a slightly shorter downhill putt. Salas missed her uphill birdie putt just left of the hole, and Park knocked her putt right into the center of the hole.

This is Park’s first win since the KPMG Women’s PGA Championship in July and her third of the season. With the win, Park took home total prize money of $300,000. Her three victories this season will be good enough to move up her world ranking by three spots from fourth to first, which will be updated today.

Park, who made her LPGA Tour debut in 2017, had a successful rookie season, winning three titles - rookie of the year, player of the year and the money title. She also won two tournaments, including a major tournament, and briefly took the No. 1 spot in the Rolex World Rankings in November, becoming the first rookie to do so since the ranking system was first introduced in 2006.

Despite her successful debut last season, Park had an inconsistent second season on the tour.

Though Park won a tournament in May, Park she missed the cut in three out the five tournaments since then. Park ended her struggle in July, winning the KPMG Women’s PGA Championship. Despite her slow start to this season, Park’s victory on Sunday allowed her to achieve her goal of winning more tournaments than her rookie season. Park will now have a shot at winning her fourth tournament this week in Canada as she enters the CP Women’s Open as a defending champion.

Amy Yang finished tied for third at 22 under par.