Park misses out on epee gold

Park misses out on epee gold 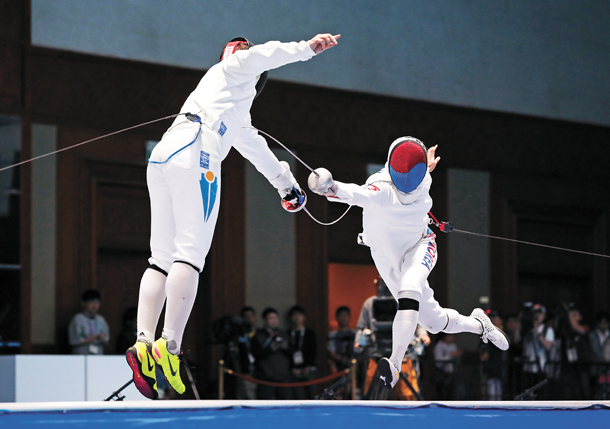 Park Sang-young, right, competes in the men’s individual epee final against Dmitriy Alexanin of Kazakhstan at the 2018 Asian Games at Jakarta Convention Center Cendrawasih Hall in Jakarta on Sunday. [YONHAP]

Park Sang-young hoped to become the first male Korean epee fencer to win gold in both the Olympics and the Asian Games but came up just short, winning silver.

Park, world’s No. 3 and 2016 Olympic gold medalist, lost 12-15 to the eighth ranked Dmitriy Alexanin of Kazakhstan in the final on Sunday. During the final match, Park struggled with a knee injury. Park took a medial timeout while trailing 1-4, getting emergency treatment on his knee. After the short break, Park won the first point but the match eventually slipped out of his hands, giving up five straight points to Alexanin.

Despite the injury, Park managed to pull himself back into contention, getting as close as 12-13 with 20 seconds remaining. Sadly, it wasn’t meant to be. Alexanin clinched the last point with 6.7 seconds remaining.

“If I kept my composure and just slowed things down, maybe the result would have been different,” Park was quoted as saying on Yonhap. “But Alexanin was such a tough opponent. And I certainly didn’t lose because of my knees. He just flat out beat me.”

At the 2014 Asian Games, Park only competed in the team event, which Korea won. At the 2016 Rio Olympics, Park had a miraculous win in the men’s individual epee final to win gold. At the time, Park was losing 10-14 to Geza Imre of Hungary, but won five straight points for a huge come-from-behind victory. During the finals, Park kept on telling himself “I can do it.”

This time around, the “I can do it” approach only got him as far as the semifinals.

In that match, Park looked set to take an easy win, pulling ahead with a big 7-2 lead. Kano Koki of Japan pulled back to tie the score at 9-9. Thankfully, Park got back in the game to win four straight points and the match. It might be because he was forced to fight so hard in the semifinals that Park’s knee left him down in the final.

Park, who started fencing at age 14, first got on the Korean national team at age 18 in 2013. Despite a successful junior career, Park tore his anterior cruciate ligament in 2015 while competing at the Budapest Grand Prix. Though he wasn’t fully healed, Park had one of the most upsetting victories at the Rio Olympics.

Following that victory, Park became one of the biggest Korean athletes after the Games - filming various advertisements, giving lectures and publishing his own book. As Park started to make too many appearances outside of sport, his world ranking slowly dropped and eventually he dropped out of the national team.

“I cared too much about how others looked at me,” Park said. “Once I started rushing for results, it made it harder to perform and I got in a slump.”

Adding to the fame, Park also struggled with the pressure of thinking that he had to play better. Rather than giving up his career, Park spent his own money to compete at international events.

Park took the same flight as the national team players and stayed at the same hotel as the team but wasn’t representing Korea.

“My parents told me that I can’t give up like this,” Park said. “So they suggested I compete at my own expense. This allowed me to take myself away from the pressure.”

As an individual, Park won two international events and slowly got himself out of the slump.

“Whether I win or lose, I learned that people don’t really care about me,” Park said. “I also learned that the more I rush, the longer it’ll take me to get the result I want.”

Park improved his world ranking significantly, from 15th last year to third this year. With the improvement, Park successfully earned his spot on the Korean national team at the Asian Games.

Park will now put aside his disappointment in the individual event and focus on defending Korea’s gold in the team event tomorrow.