FTC tries to stamp out corruption

FTC tries to stamp out corruption 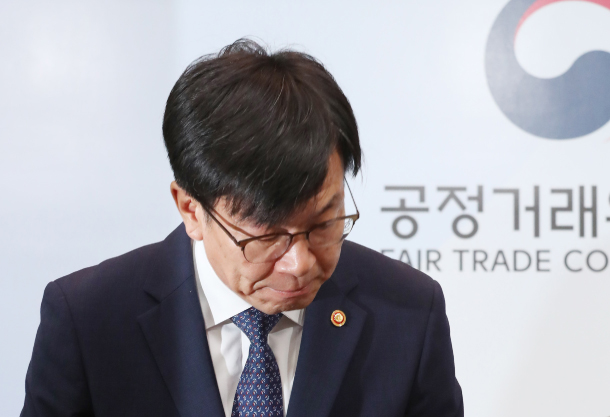 Kim Sang-jo, chairman of the Fair Trade Commission, apologizes for the recent job-for-favor scandal involving former and current officials of the watchdog on Monday at the Sejong government complex. [YONHAP]

Korea’s antitrust watchdog is strengthening its efforts to eradicate corruption among its officials, particularly focusing on rooting out a practice where its former employees got hired by local conglomerates they oversaw while working for the commission, according to the country’s top competition regulator on Monday.

According to Kim Sang-jo, chairman of the Fair Trade Commission (FTC), the corporate watchdog will bar private contact between its current and retired officials and will make it obligatory for retirees to list their employment status for 10 years after their retirement date.

The commission will also establish a regulatory framework that will make it impossible for officials set to retire to bypass a law that prohibits them from taking jobs at private companies they oversaw.

Officials will also be banned from providing paid lectures or attending seminars sponsored by private companies including local law firms.

The FTC is adopting such measures in the wake of what might be the biggest corruption scandal in its 37 year history.

Korean prosecutors last week indicted 12 past and present officials of the FTC for pressuring private companies to guarantee onward employment, a result of an investigation that started in June this year after allegations arose that officials at the regulator shut down cases prematurely to gain favor with local companies.

Three individuals, including former chairman Jeong Jae-chan, have been detained. The remaining nine officials were indicted without detention. Jeong and other indicted officials face charges that they helped 18 former commission employees obtain jobs at 16 private companies from 2012. In return, they turned a blind eye to violations of the local anti-trust regulations committed by these companies.

Prosecutors explain that they determined the salary and other details of the contracts in the process.

They also allegedly shuffled around commission staff to launder their work history and avoid a local law that forbids high-ranking government officials from taking jobs related to the work they were in charge of for the past five years during the first three years after their retirement.

Officials were reassigned five years prior to their retirement so they would safely dodge the law.

The 18 officials hired through this way took home about 7.6 billion won ($6.77 million) in salary from private companies including affiliates of Shinsegae Group.

“I consider this incident the biggest crisis for the commission since its establishment that cost it the trust of the public,” said Kim on Monday during a press briefing at the Sejong government complex. “Through these measures, I hope we are able to straighten out the wrong and become a more transparent organization.”

After he came into office in June last year, Kim rolled out a number of measures to increase the transparency of the commission and its organizational structure, including a policy that restricts private contacts between its officials and people from outside related to cases they are in charge of.

But when asked whether he was aware of such job-for-favor cases, Kim said the findings by the prosecutors came as shock to him.

“The documents from 2009, which none of the commission employees knew about, came to the surface and worked as the most important evidence for the prosecutors,” Kim said. “Such issues cannot be overlooked simply as what’s done in the past.”

Kim further explained that while the commission is a small government organization with only about 600 employees, it yields exclusive authority in anti-trust and competition laws, giving its officials a substantial amount of power.

Going forward, Kim admitted to the needs of decreasing the level of authority of the watchdog.

“In order to get to the bottom of this issue, we need to disperse the authority the commission monopolizes so that civil complaints could be addressed more swiftly and effectively,” Kim said. “It will also pave the way for the commission to really focus on important cases, ultimately providing a long term solution to the issue that the commission is facing right now.”

The commission has been preparing measures to address the issue, including changing the law which gives exclusive authority to the FTC to hear anti-trust complaints and will disclose the details to the Ministry of Justice today.