Cadillac House aims for the trendy

Cadillac House aims for the trendy 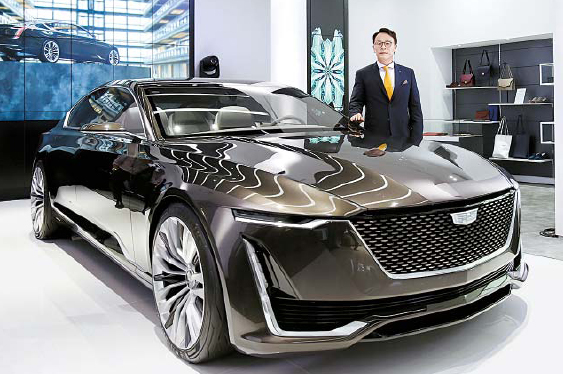 Cadillac hopes to shake off its stodgy image and attract younger, trendier drivers in Korea, and it has opened a flashy brand experience center to win them over.

The American luxury brand opened Cadillac House Seoul in southern Seoul on Monday. Visitors can check out photo exhibitions and souvenir shops related to the brand, and many of the carmaker’s models are also on display.

Cadillac House operated as a pop-up store last year, but the company decided to make it permanent after receiving positive feedback.

“Our objective this year is to diversify marketing strategy to increase point of contact both online and offline,” Cadillac Korea President Kim Young-sik said in a press conference held Monday at Cadillac House Seoul.

Cadillac Korea unveiled the Escala Concept sedan in Korea for the first time. It was first revealed in the United States in 2016. Cadillac, which is known for its bulky and classic designs, added futuristic features to the concept car, including a curvy sideline and vertical headlight lamp in the front. The carmaker said that this design identity will be implemented in the company’s production lineup from 2021. The Escala will be on display at the Cadillac House for the next three weeks.

Cadillac Korea also unveiled a limited-edition version of its ATS sedan called the ATS Supreme Black. The all-black limited edition vehicle also has some of the performance features, such as a rear spoiler, that are only found on Cadillac’s premium vehicles. Fifty of the cars will be sold in Korea.

The photo exhibition on the second floor showcases Cadillac Korea’s collaboration with camera brand Leica. Three renowned figures in art and culture took photos of Cadillacs in different cities with Leica cameras. Donghae from K-pop group Super Junior is one of the photographers.

Kim said that Cadillac House showed the carmaker’s ambition to renew its image and become more attractive to younger buyers. It said the latest change of the company’s name from GM Korea to Cadillac Korea will contribute to improving the brand’s image.

“The fact is that Korea is the only country among Cadillac’s 52 global market that uses the car’s brand [Cadillac] as the company’s name, whereas other countries still use just GM,” Kim said. “It shows that the New York headquarters is showing that there is much interest in the Korean market and a willingness to invest here.”