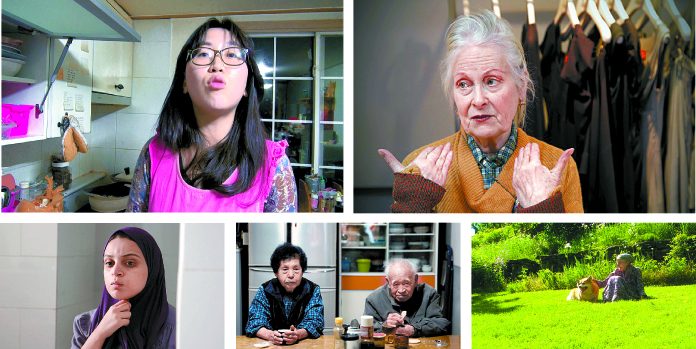 Seventy-two documentaries are being screened at EBS International Documentary Film Festival. Clockwise from top left are scenes from “Myeoneuri: My Son’s Crazy Wife,” “Westwood: Punk, Icon, Activist,” “Tasha Tudor,” “The Night of All Nights” and “Amal,” five films that stand out from the rest. [EIDF, SYCOMAD]

The annual EBS International Documentary Film Festival (EIDF) has returned this year for its 15th edition with the theme “Documentary - Right to Fight.” The festival kicked off on Monday and will continue until Sunday. This year, a total of 72 films from 32 countries will screen at theaters in Hongdae, western Seoul, and Ilsan in Gyeonggi. The majority of the documentaries will also be broadcast on the EBS TV channel during the event.

This year’s EIDF has 11 sections, including the competitive Festival Choice, World Showcase and My Life, My Art events. The event focuses on unique and experimental documentaries.

Herstory is a newly created section that echoes the rise of contemporary feminism, and consists of three documentaries that show the struggles and discrimination encountered by women.

EIDF will feature a variety of interesting documentaries sure to grab the attention of a variety of movie lovers. This reporter picked out five films that deserves the audience’s attention.

Proven by the international popularity of her brand, Vivienne Westwood is an irreplaceable figure and one of the most recognized fashion icons of our time. Her career now stretches back nearly half a century. With her creative and punk-inspired collections, the 77-year-old British fashion designer and businesswoman has captured the hearts of the fashion-conscious around the world. “Westwood: Punk, Icon, Activist,” which opened the EIDF on Monday, is the first movie to depict Westwood’s story. Although the fashion designer is currently associated with glossy success, the film shows a different side of her career. The movie, which features Westwood herself, depicts the uphill struggles she had to endure for success in her early life.

In the film, she refuses to discuss her thoughts on the genesis of punk, which is what she’s primarily known for. But viewers get to see plenty of behind-the-scenes operations that will help them understand the qualities that helped Westwood achieve stardom - toughness, candidness, and most importantly, skill.

For married women facing conflict with their mother-in-law over unfair treatment, Kim Jin-yeong from “Myeoneuri: My Son’s Crazy Wife,” will show you how far a daughter-in-law can go to deal with the problem. Directed by Jin-yeong’s husband, Sun Ho-bin, the documentary depicts the intense tug-of-war relationship between Jin-yeong and her mother-in-law.

While her mother-in-law expects Jin-yeong to act like the devoted and obedient daughter-in-law as she herself had been, Jin-yeong demands respect and to be treated as a guest when she visits her in-laws. This meant not always having to be the one to do all the dishes or refer to her brother-in-law as “young master.” As Sun felt helpless in the conflict between his mother and wife, he decided to document it.

The film gained praise from many married women in Korea when it screened in theaters in January.

Screening under the Herstory section, “Amal,” directed by Mohamed Siam, documents the disillusionment of Arab youth through the eyes of a teenage girl named Amal. She is a bright and fearless teenager who defies authority and the expectations of a patriarchal society.

The film follows Amal as she goes to Tahrir Square in Cairo during the Arab Spring protests of 2011. During the protests, she is beaten by police and dragged across the square by her hair. This documentary follows six years after the revolution.

Growing up in post-revolution Egypt while the country is experiencing major changes, Amal searches for her place, identity and sexuality in the midst of a constant political turmoil.

The Night of All Nights

Through the eyes of four seemingly ordinary older couples from different corners of the world, “The Night of All Nights” highlights the importance of love in living. The documentary features four couples from the United States, India, Germany and Japan. Their humorous interviews cover love, marriage and the happy years they have spent together.

Just like any other couples, they, too, quarrel over trivial matters and get upset with their partners. In one scene, for example, an old Japanese lady quietly complains that “we used to talk more,” while the Indian husband admits that “we quarrel of course.” However, according to him, he grows “nearer” to his wife as they quarrel.

The delightful film provides a chance for audiences to peep into the joy and richness of life and love in the twilight years.

The late Tasha Tudor is a renowned American illustrator and writer of more than 100 children’s books. Though she may be best known for books like “The Secret Garden” and “A Little Princess,” Tudor was also a naturalist who cultivated a magnificent garden on her vast property and lived the life of her dreams.

The film explores the best-selling author’s daily life, which involved both success and challenges and struggles in both her personal and professional lives. She divorced twice and at times struggled to make ends meet. Despite the hardships, however, her nature-friendly life in the mountains offers audiences a sense of calm, leaving viewers to question whether a hectic urban lifestyle is ideal.