‘The Witness’ climbs to top of charts : Tale of an ordinary man who sees a murder manages to defeat ‘The Spy Gone North’

‘The Witness’ climbs to top of charts : Tale of an ordinary man who sees a murder manages to defeat ‘The Spy Gone North’ 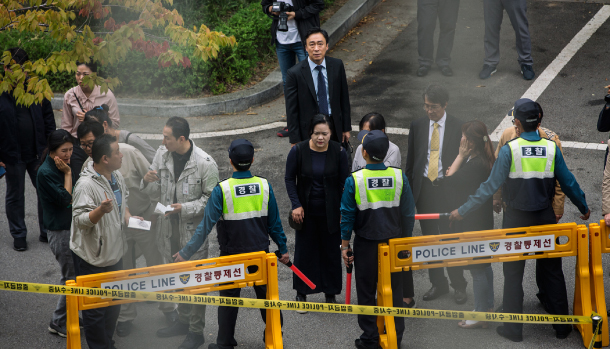 “The Witness” conquered Korea’s weekend box office, selling more tickets than major summer blockbusters like “The Spy Gone North” and “Along With the Gods: The Last 49 Days.” [NEXT ENTERTAINMENT WORLD]

Before the thriller “The Witness” opened last Wednesday, star Lee Sung-min was apprehensive about the relatively small film opening in the peak summer season with competition from blockbusters like “The Spy Gone North,” in which he also stars in, and “Along With the Gods: The Last 49 Days.”

But last weekend’s box office showed that Lee needn’t have been worried. “The Witness” sold more tickets than the mighty “Along With the Gods” sequel to top Korea’s weekend box office in its debut weekend.

“The Witness,” which is about a murder in an apartment complex, sold 810,000 tickets from Friday to Sunday, accounting for 25.9 percent of all weekend ticket sales. Data from the Korean Film Council showed that the movie has sold a total of 1.36 million tickets since its release on Wednesday.

The movie unfolds as an ordinary office worker (Lee) witnesses a brutal murder of a young woman committed by an unknown man (Kwak Si-yang) from his apartment veranda. Sang-hun instinctively picks up the phone to report the incident to police, but reconsiders when he realizes that the murderer and he exchanged glances. Fearing retaliation on his family, including his wife (Jin Kyung) and their daughter, Sang-hun decides to stay silent.

Narrowly behind “The Witness” was “The Spy Gone North.” The espionage flick, which was screened at the Cannes Film Festival in May although not in competition, sold 781,000 tickets in three days, 25.3 percent of the weekend’s total ticket sales.

Based on a true story of a former South Korean military officer (Hwang Jung-min), who is recruited in 1993 by the National Intelligence Service to infiltrate North Korea amid leaks of information that North Korea is developing nuclear weapons, the movie has sold a total of 4.04 tickets following its second weekend. Lee plays a high-ranking North Korean official in the film.

Sliding two spots down, “Along With the Gods: The Last 49 Days” sold 640,000 tickets in its third weekend, bringing its total ticket sales to 11.32 million. Its predecessor, also adapted from Joo Ho-min’s sensational webtoon, sold a whopping 14.41 million tickets following its release in December, becoming the second best-performing film in Korean history after period epic “Roaring Currents” (2014).

Reprising their roles from the first film, Ha Jung-woo, Ju Ji-hoon and Kim Hyang-gi play three grim reapers. Ma Dong-seok also joins the film. The sequel focuses on the relationship that the three grim reapers had a thousand years ago when they were alive.