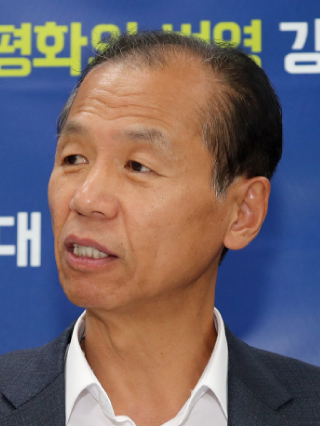 The governor of Gangwon said Monday that he proposed that the two Koreas co-host the 2021 Asian Winter Games during his recent visit to Pyongyang.

Gangwon Gov. Choi Moon-soon, who visited North Korea on Aug. 10-19 to participate in an international under-15 football tournament in Pyongyang, said the North responded positively to his co-hosting proposal for the largest Asian winter sports festival.

“Co-hosting the Asian Winter Games is a matter to be discussed by the leaders of South and North Korea. I’ll report it to the government, but it remains to be seen whether the proposal will be adopted by both sides,” said Choi.

Prior to the start of the 2018 Winter Olympic Games in PyeongChang in Gangwon early this year, South and North Korean skiers held joint training at the North’s Masikryong Ski Resort. Officials from the two Koreas have since floated the idea of co-hosting the next Asian Winter Games.

According to Choi, the youth football tournament, jointly organized by Seoul’s South-North Korea Inter-Korean Sports Association and Pyongyang’s April 25 Sports Club, was held Aug. 13-18, and also featured teams from Russia, Belarus, Uzbekistan and China. Known as the Ari Sports Cup, the U-15 event was first held in South Korea’s border town of Yeoncheon in 2014. This month’s event was the fourth edition.

Choi said that the two Koreas have tentatively agreed to hold the fifth Ari Sports Cup U-15 football games in Chuncheon, Gangwon, in October, and next year’s sixth tournament in the North’s Wonsan.

He added the venue for next year’s youth football tournament could be changed to Pyongyang if Wonsan fails to complete the construction of a new stadium by then.

Based on mutual trust built through sports exchanges, Choi said, Gangwon will continue to expand cultural and economic cooperation with the North, including a joint exploration of an ancient fortress in the border area.