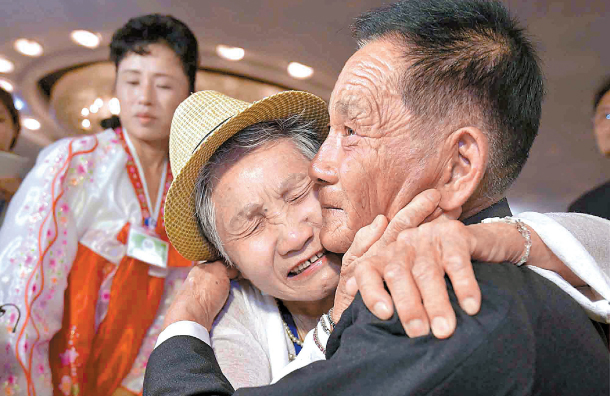 Lee Geum-seom, 92, one of 89 relatives from South Korea visiting the North this week to reunite with loved ones for the first time since the 1950-53 Korean War, embraces her son, Ri Sang-chol, 71, on Monday at the Mount Kumgang resort in Kosong County, Kangwon Province, along North Korea’s east coast. [JOINT PRESS CORPS]

Nearly 300 people separated from close relatives by the Korean War gathered in North Korea’s Mount Kumgang resort for their first reunions in more than six decades, which are also likely to be their last.

Eighty-nine South Koreans, mostly gray-haired and frail, crossed the border early Monday with a large delegation from the South that included relatives traveling with them, journalists, support staff and government officials. The group had arrived in Sokcho, Gangwon, on Sunday and departed the coastal city on Monday morning to take a road connecting the two Koreas along the east coast to reach the resort.

According to data from South Korea’s Unification Ministry, which handles relations with the North, 185 North Koreans were scheduled to meet with the 89 South Koreans in the first of two reunions planned for this week. The oldest South Korean taking part is 101-year-old Baek Seong-kyu, who will be meeting his North Korean granddaughter and daughter-in-law. Six South Koreans are related to someone who was kidnapped by the North during the war.

The first reunion runs from Monday through Wednesday, with the families meeting with each other on six different occasions for 11 hours in total. On Monday, they had a group reunion from 3 to 5 p.m. at the Kumgang Hotel within the resort, and shared dinner from 7 to 9 p.m. at the same venue.

The second batch of reunions runs from Friday through Sunday with a similar schedule.

Lee Geum-seom, 92, wailed as she laid eyes upon her son, Ri Sang-chol, 71, for the first time in over 60 years, pulling him to her chest as she cried, “Sang-chol!” Sobbing, Ri took out a family photo and pointed to his father, Lee’s husband, who died in North Korea.

Baek, the 101-year-old, was handed a photo of his dead son by his daughter-in-law, Kim Myong-sun, 71. “It’s an old, shabby photo so I brought a copied version,” she said with tears in her eyes.

“Can I take this home?” Baek asked.

Min Byeong-hyun, 82, couldn’t believe his eyes when he saw his younger sister, Dok-yo, 72.

“The last time I saw you, you were a tiny baby,” said Min. “I barely recognize you.”

Dok-yo sobbed, “I can’t recognize you, either.”

“I stayed alive to meet you, oppa [older brother],” Yu-dok said, as she whipped out a school graduation photo of him.

“Look,” she said. “I used to stare at this photo every single day, wondering when I could meet you. I’m so glad that time has finally come.”

The reunions were included in the Panmunjom Declaration signed by South Korean President Moon Jae-in and North Korean leader Kim Jong-un on April 27, in which the countries agreed to “endeavor to swiftly resolve the humanitarian issues that resulted from the division of the nation” and “proceed with reunion programs for the separated families” on the occasion of the Aug. 15 Liberation Day, when a then-unified Korea gained independence from Japan’s colonial rule in 1945.

But negotiations to plan the reunions were sometimes rocky.

The North threatened to walk away if Seoul continued to refuse to repatriate 12 North Korean restaurant workers who defected to the South in mysterious circumstances in 2016. The South Korean government continues to say they defected voluntarily but the North claims they were kidnapped by Seoul’s spy agency during the former conservative Park Geun-hye administration. The two sides have yet to resolve that issue.

The last round of reunions was in October 2015, shortly before inter-Korean relations froze over after Pyongyang’s fourth nuclear test in January 2016. This week’s reunions are the first to be held since Moon took office in May 2017.

In a meeting with close aides at the Blue House on Monday, Moon stressed the need to hold more reunions and broaden their scale.

“We’re really running out of time,” said Moon, who stressed that the reunions were the “utmost” humanitarian project between the two Koreas at issue.

“There are over 56,000 people in the South who haven’t met with their families in the North yet. I saw in a news report that a 95-year-old man burst into tears after realizing he wasn’t chosen again this time, and how he thought he no longer had a chance.”

The first face-to-face family reunions organized by the two Koreas were in 1985, though they didn’t resume until 2000. The two Koreas have held 20 face-to-face family reunions and seven video reunions since 2000. From 1988, roughly 133,000 South Koreans have registered themselves with the government as candidates for inter-Korean reunions, and more than half have passed away. Among some 57,000 survivors, over 60 percent are 80 years old or above.