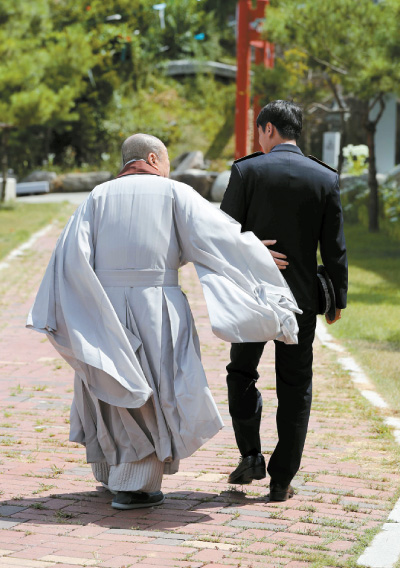 Kim, a police officer, and Park Sam-joong, a monk, meet at a temple in Anseong, Gyeonggi, on Thursday. [KIM SANG-SEON]

Clad in his uniform, 36-year-old Kim looks like any other policeman.

But the path to owning that uniform was a long one for Kim. It took him 22 tries to pass the police entrance exam and it seemed like his dream might never be realized because of his criminal record.

In 2002, Kim was arrested for damaging an ATM machine with a rock in a drunken attempt to steal cash. He was 19 years old at the time and had recently enrolled as a top student in the literature and composition department of a university.

“I wanted to experience the ends of life,” Kim told the JoongAng Ilbo on Thursday, explaining that he believed trying all things in life and going to extremes would help him become a better writer. But most of his choices led down a destructive path.

What changed his outlook on life, Kim said, was a passing comment from a monk.

Kim was on a trip to Japan in 2003, organized by the youth detention center he was staying at. He was among 17 adolescents selected among a dozen youth detention centers throughout the country to go on a cultural tour to Japan as part of a rehabilitation program. Park Sam-joong, a monk based in Busan, was the chaperone of the group.

“We were on our way back to Busan from Japan, when Park told me, ‘Kid, there is something good in you,’” Kim said. “His words took root in me and gave me hope to do some good for this world.”

Kim set his mind on becoming a police officer.

“Of all the jobs, I thought police officers do the most good,” Kim said. “But many people around me were against the idea, saying that my criminal record would get in the way.”

Kim’s first test was in 2008. It took 21 more attempts before he finally passed.

“I made it to the interview round 14 times,” he said. “Those years helped me realize that I was an incomplete person with many sins.”

Kim stopped telling everyone, including his family members, after his fifth failure in 2011. He studied during the day and worked night shifts at different jobs for nearly 10 years.

“In my last interview, which took place last year, I told my interviewer that I wasn’t sure I would apply again if I am not selected,” he said. “But I told the interviewer that though things change in life, I will try my best to have sympathy toward others and do good for the world.”

Kim said he couldn’t stop the tears when he finally got accepted in June. The nine years and 10 months he spent trying to get into the police were a good lesson in life, he said.

On Thursday afternoon, Kim put on his police officer’s uniform and visited Park at Yeongpyeong Temple in Anseong, Gyeonggi.

“I just wanted to show him the man he saw in me all those years ago,” he said.