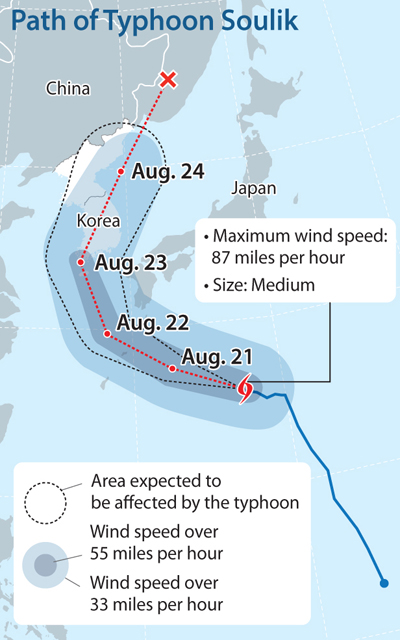 Typhoon Soulik is expected to hit Mokpo, South Jeolla, around Thursday, bringing with it heavy rain and storms that may cause severe damage.

This will be the first time in six years that a typhoon will hit Korea.

The Korea Meteorological Administration (KMA) said at 9 a.m. Monday that the typhoon is passing over the sea southeast of Kagoshima, Japan, and is approaching the Korean Peninsula from below. By Wednesday morning, the medium-sized typhoon is expected to approach Seogwipo, Jeju Island. Its top wind speed is projected to be 87.2 miles per hour.

It will move up toward Mokpo on Thursday morning and cross over the Jeolla, Chungcheong and Gangwon regions before heading northeast toward the sea near Chongjin, North Korea, by Friday. It is expected pass through Vladivostok, Russia, on Saturday and weaken northeast of the city, according to the KMA.

Typhoon Soulik, whose name takes after a word in a Micronesian language for the chief of a legendary tribe, is the first typhoon in six years to hit Korea. Typhoon Prapiroon, which affected the country in July, did not make landfall on the peninsula - it passed over the sea east of Jeju Island and weakened in the East Sea. The last typhoon to make landfall in Korea was Sanba in September 2012.

“As of now, the possibility of the typhoon hitting the southwestern region of Korea is high,” said Kang Nam-young of the KMA’s National Typhoon Center on Monday. “Observing the typhoon’s state now, I think the likelihood of the typhoon weakening before making landfall on the peninsula is quite low.”

Some experts warned that Soulik may cause as much damage as Typhoon Bolaven, which hit Korea in August 2012. Typhoons Bolaven and Tembin came around the same time and caused 636.5 billion won ($567.2 million) worth of damage, according to the KMA, ranking fourth in the amount of damage caused by typhoons in Korea since 1904.

“Before reaching Korea, the typhoon will slow down and soak in the energy from the heated-up sea,” said Yoo Hee-dong, director of the forecast division of the KMA. “Typhoon Soulik will likely have as much of an impact as Typhoon Bolaven. We need to be prepared.”

The rains will reach Jeju on Wednesday and the rest of the country on Thursday and Friday, the KMA said.

“Once it starts raining, Jeju and areas near the southern coast may see more heavy rainfall than others,” said a KMA official. “The wind speed in some areas will be higher than 40 meters per second [90 miles per hour], so facilities must be fastened well and people should look out for their safety.”

From Wednesday to Thursday, it may rain more than 50 millimeters (2 inches) per hour in Jeju and in the southern coastal areas, with some areas receiving more than 400 millimeters of rainfall in total, the KMA said.