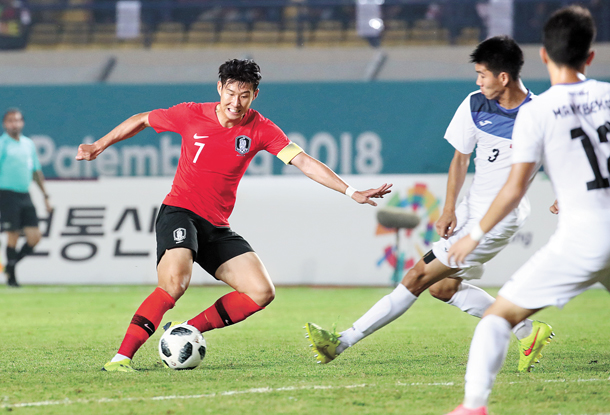 Son Heung-min, in red, competes for the ball during a Group E match against Kyrgyzstan at Si Jalak Harupat Stadium in Bandung, Indonesia, on Monday. [YONHAP]

Korea narrowly defeated Kyrgyzstan 1-0 to reach the round of 16 in the men’s football competition at the 18th Asian Games on Monday.

Korea, the defending champions, advanced to the knockout stage as the runners-up in Group E with two wins and one loss. Korea beat Bahrain 6-0 in their opening match but suffered a shocking 2-1 defeat to Malaysia.

Malaysia also finished the group with two wins and one loss, but they were declared Group E winners thanks to their win over Korea. The head-to-head record is the first tiebreaker when two teams are tied on points.

Korea will next face Iran, the winners of Group F, in the round of 16 at Patriot Chandrabhaga Stadium in Bekasi, west of Jakarta, tomorrow.

The men’s football competition at the Asian Games features 25 teams in six groups. The top two teams from each group and four best-performing third-placed teams will advance to the round of 16.

Trying to recover from their humiliating loss against Malaysia, Korea started aggressively.

Korea failed to unlock Kyrgyzstan’s dogged defense in the first half, however. The Taeguk Warriors fired 12 shots, but none of them could find a way past Kyrgyz goalkeeper Kalysbek Akimaliev.

Struggling to find the net, Korea finally made a breakthrough in the 63rd minute thanks to Son.

The 26-year-old volleyed off Hwang In-beom’s corner in the box, leaving Akimaliev helpless.

Korea then put Hellas Verona forward Lee Seung-woo on for Na in the 73rd.

They nearly doubled their lead in the 88th, but Hwang Hee-chan’s strike and Son’s follow-up attempt both failed to hit the net.

Son said he wants to thank his young teammates for securing a win in a “tough” match. Son is one of the wild card members for Korea at this under-23 tournament. Each team is allowed to field up to three players older than 23.

“Kyrgyzstan went for counterattacks with almost all their players focusing on defending,” he said. “We knew their tactics, but it’s difficult to win an important match.”

Korea fired 26 shots, but only eight of them were on target. When asked about his team’s lack of accuracy, Son said the players need to make improvements, but he won’t tell them what to do.

“It’s not easy to score goals,” he said. “I’m sure the players know what the problem is for us, so I won’t tell them one by one.”

Son said Korea needs to focus on its game in the knockout stage.

“Iran is strong, not only at the senior level but also at the youth level,” he said. “All teams in the knockout stage can be considered gold medal contenders.”