The Korean team is in safe hands

The Korean team is in safe hands 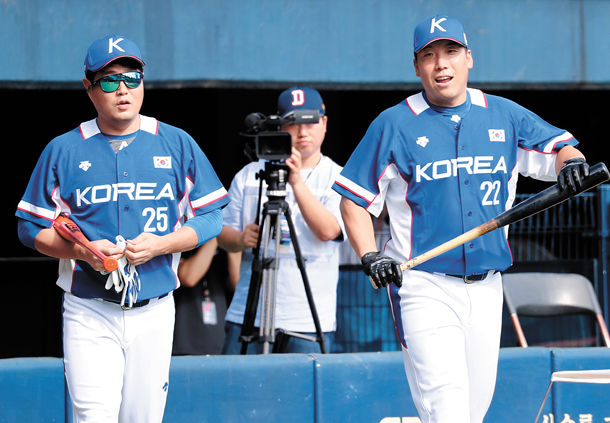 Yang Eui-ji of the Doosan Bears, left, and Kim Hyun-soo of the LG Twins train for the 2018 Asian Games at Jamsil Baseball Stadium in southern Seoul on Sunday. [YONHAP]

The Korean baseball team for the Asian Games went through a number of iterations as poor performance and injuries sent manager Sun Dong-yol back to the drawing board, but there was one position that was set in stone from day one. Sun was not getting on a plane to Indonesia without Yang Eui-ji of the Doosan Bears.

“The catcher was decided right away,” Sun said.

Yang, considered the best offensive and defensive catcher in the KBO, will play a crucial role in leading the young pitchers at the Asiad. But it looks like he knows what he’s doing.

Leading the pitchers is nothing new for Yang. Back at Jamsil, the veteran catcher has been given complete control of the Bears’ pitchers. Yang is known for his ability to bring out the best in his teammates, and the Bears’ manager Kim Tae-hyung and battery coach Cho In-sung were happy to give him free reign.

Although Yang is one of the most dominant players in the KBO, it wasn’t until 2015 that he got to represent the country. Yang was first selected for the national team for the 2015 World Baseball Softball Confederation Premier12. He got off to a flying start, leading the team to victories against the Dominican Republic and Venezuela.

This season, Yang has played a crucial role in helping the young Doosan pitchers stay focused on their game. The Bears have a young bullpen led by 23-year-old Ham Deok-ju, 21-year-old Lee Young-ha, 20-year-old Park Chi-guk and 19-year-old Gwak Been.

Just as he’s been doing with his club, Yang is expected to play the same role on the national team at the Asian Games. Along with Lee Jae-won of the SK Wyverns, Yang will lead the young pitchers and help them to put aside their nerves and make their pitches in order for Korea to defend their title for a third time.

As the Korean team made an aggressive decision to go through a generation change, only two out of 11 pitchers on the roster - Yang Hyeon-jong and Jung Woo-ram of the Hanwha Eagles - have experience on the senior national team. When expanding the experience to the Asia Professional Baseball Championship (APBC), only four pitchers have played on the national team, as Jang Pil-joon of the Samsung Lions and Im Gi-yeong of the Tigers are the only two that competed. The pitchers’ average age, too, has dropped significantly to 25.9 years.

Despite not having much time to train together as a team, Yang is not too concerned about teamwork. He is well aware of the pitchers’ strengths and weaknesses from playing against them in the KBO.

“It’s O.K. because I’ve been at bat against them,” Yang said. “We are given a short time to train [together] but I can get used to catching their balls in bullpen [warm-up] pitching. I’ll just try my best to help them pitch at their best, just like they do in regular season games. During the 2017 World Baseball Classic, pitchers had a hard time with the ball. I don’t think that will be a problem this time because there isn’t much difference in the ball.”

Yang’s depth of knowledge about the pitchers comes from his batting average this season. Though he gave away the top spot in the league’s batting average, a spot that he had held since the start of the season, to Lee Jung-hoo of the Nexen Heroes last week, he is still in second place with .366. Yang has also hit 20 home runs.

Despite Yang’s impressive statistics at bat, for the Asian Games, he is focused on catching.

“Rather than batting, I’ll focus on defense at the event,” Yang said. “I don’t have any pressure in offense because there are batters that are a lot better than me. So defense comes first.”

While some of the players still seem to be recovering from the heat, Yang joined the national team at his best condition, as the Bears opted to let Yang build up his strength by splitting his time behind home plate with Park Sei-hyok.

“In international events, physical condition is the most important,” Yang said. “Manager Kim Tae-hyung has been scheduling my season really well.”