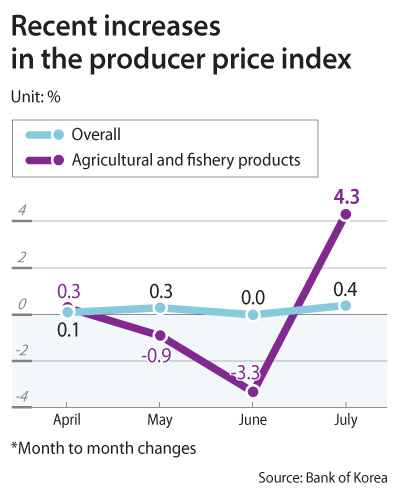 The Bank of Korea (BOK) on Tuesday announced the preliminary producer price index for July at 104.83 points, up 0.4 percent compared to the previous month and a 2.9 percent increase year on year. This is the 21st month-on-month increase in a streak of hikes that continued after the index slipped in Nov. 2016. July’s figure is also the highest since Sept. 2014, when the index peaked at 105.19.

The producer price index measures price changes for goods and services at the producers’ end and is a barometer of future consumer inflation.

Prices for agricultural produce pushed the index up. According to government estimates, more than five million animals died and 2,330 hectares of farmland were damaged by the hot weather.

Vegetables were hit the worst, with prices rising 7.9 percent during the same period. The price increase wasn’t just the result of typical seasonal temperature changes - the jump was 15.4 percent higher than the same month last year.

The price hike for industrial goods was smaller at an on-month increase rate of 0.3 percent in July. The rise was led by a 2.9 percent increase in coal and petroleum goods, which resulted from a rise in international oil prices.

Rising produce prices is an ongoing concern for the government. Last week, President Moon Jae-in asked government officials to come up with a way to stabilize produce prices before the Chuseok harvest festival. This national holiday annually pushes up fresh food prices as families gather to have meals together or prepare food for ancestral rite ceremonies.

Another event that’s worrying farmers and the government is Typhoon Soulik, which is expected to hit the country on Thursday. This will be the first time in six years that a typhoon has directly hit Korea. Some experts anticipate that its effect may be as big as Typhoon Bolaven in 2012, which caused damage worth more than 600 billion won.

The Ministry of Agriculture, Food and Rural Affairs called a meeting on Monday to seek preemptive measures against possible damage.

“This is the first typhoon in six years that’s likely to hit Korea and because of the gap, there may be insufficient preparations,” said Minister Lee Gae-ho during the meeting. “Preemptive measures have to be set up to a point to be called excessive in order to truly avoid damage.”