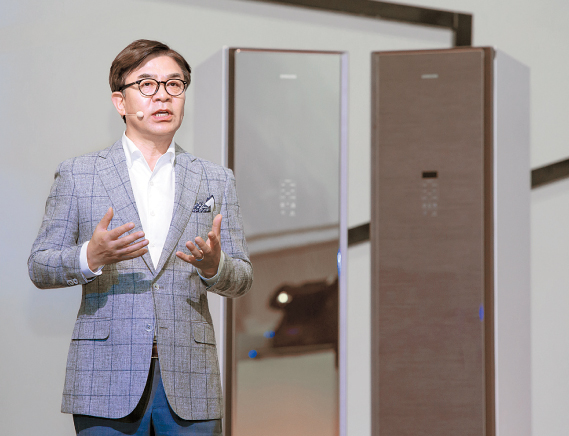 The appliance’s main claim is that it eliminates fine dust and odors from any type of clothing from suits to padded coats and even leather. Externally, it looks like a slim, high-tech closet. On the inside, it resembles a refrigerator with white walls. The trick to rapidly cleaning clothes is air and steam forced from the top and bottom of the machine.

“[The AirDresser] combines various types of know-how from Samsung Electronics’ home devices, including technologies for steam from washing machines, low-temperature dehumidifying from driers, odor elimination from refrigerators and filters from air purifiers,” the company explained in a statement.

The concept of an at-home dry-cleaning system was introduced seven years ago by LG Electronics with its Tromm Styler. Until last year, it was the only big-name electronics brand to offer such a product, although lesser known Chinese companies did.

As a latecomer, Samsung faces the challenge of differentiating its device.

One visible difference is a pipe-like hanger that directly sends air through garments. A stronger emphasis on air is another difference from the Tromm Styler, which shakes a hanger inside to remove dust and get wrinkles out. Samsung claims this design produces less sound during the cleaning process.

The use of filters, one each for fine dust and odors, is also new to the AirDresser.

In terms of convenience, the most notable feature in the AirDresser is the “My Closet” function. Using Samsung’s SmartThings app, the appliance recognizes apparel by a bar code on a tag and automatically sets the cleaning mode most suitable for the fabric.

AirDresser can recognize certain products of six brands produced by Samsung C&T including Bean Pole and 8seconds. Samsung plans to extend this range in the future.

Samsung obviously believes the market for such an appliance has room to grow. Some 120,000 clothes refreshers were sold last year, more than 80 percent by LG.

“Research firms say the local market [for clothes cleaning systems] will sell 300,000 units [this year.] But at the moment, there’s only one dominant supplier,” said Kim Hyun-suk, Samsung’s president and head of consumer electronics at a press event held Tuesday. “[The AirDresser] will expand consumers’ choice and the market size as a whole.”

One factor fueling demand is the increased worry about fine-dust particles, which have been rapidly increasing in Korea over the last few years.

LG Electronics reported in March that it produced 100 percent more Tromm Stylers in the first three months of the year compared to 2017 due to high demand. Another mid-sized home appliance maker, Coway, jumped in the game this May with the Fresh Wear Styling System, which it started offering on a rental basis this month.

Facing more competition, LG plans to give its Styler an edge by making it the third appliance to work with the voice command AI platform ThinQ.