The unlimited data fight heats up

The unlimited data fight heats up 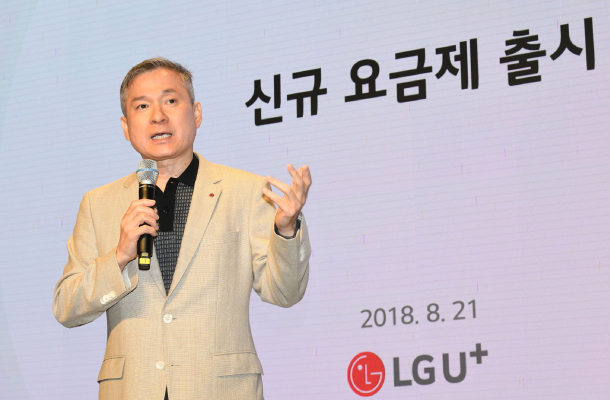 All of Korea’s three mobile carriers have finalized their phone plan reforms for this year, with LG U+ introducing the cheapest unlimited data phone plan in the country on Tuesday.

While carriers have been busy amending their phone plans to offer more data at cheaper prices, pushed by the Moon Jae-in administration’s demand to lower household phone bills, the country’s smallest carrier has been the most aggressive as it hopes to steal as many subscribers as possible from its larger rivals.

A data plan that offers unlimited long-term evolution data without slowing transfer speeds is now available from LG U+ for 78,000 won, ($69.72) 10,000 won cheaper than the first unlimited data plan introduced by the carrier in February.

LG U+ said it reduced the additional 40 gigabytes of data offered to share with family members and second devices to lower the price of the phone plan, reflecting the increase in single-person households that rarely share data with family members.

“Our 88,000 won plan stays, but based on feedback from customers with not many family members or those living alone, we decided to slim down some of the benefits included in the plan and release another unlimited data plan at a cheaper price,” a spokesperson from LG U+ said.

With the 78,000 won plan, only an extra 4 gigabytes of data is offered to share with family members.

KT released an unlimited data plan priced at 89,000 won that comes with additional benefits like VIP membership and free data sharing with a subscribers’ second device at the end of May. 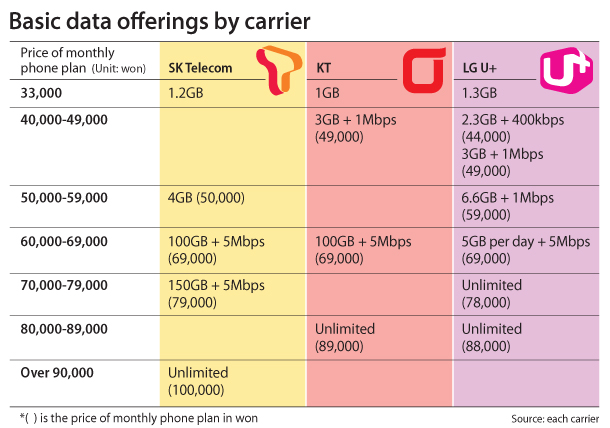 SK Telecom released an unlimited data plan priced at 100,000 won with an advantage of 40 gigabytes of data monthly to share with family members in July.

LG U+ also released four other plans priced between 40,000 and 70,000 won per month for average data users and one plan catered to light data users priced at 33,000 won.

While LG U+ has reformed its pricing system so it offers more data for phone plans in a similar price range, customers should still be aware of the details of each plan.

For instance, LG U+ appears to offer about 50 gigabyte more data on its 69,000 won phone plan compared to both SK Telecom and KT, but the carrier actually only gives 5 gigabytes of data per day before slowing down transfer speeds to 5 megabits per second.

So for people that usually consume a lot of data on the weekends, slower speeds could become an issue.

“We have prepared for these phone plans for months to secure leadership over the fierce competition,” said Hwang Hyeon-sik, an executive vice president at LG U+.

“If we continue to introduce products and services that customers are satisfied with, I believe LG U+ could become the No.1 player at some point,” said Ha Hyun-hwoi, the new CEO of LG U+ at a press briefing to introduce the new plans on Tuesday at its Yongsan headquarters in central Seoul.