Relatives at reunions get more time together

Relatives at reunions get more time together 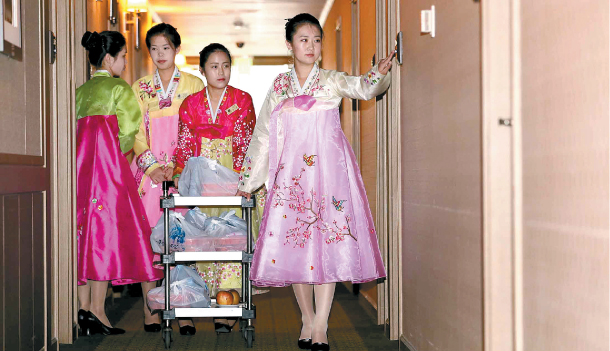 North Korean waitresses serve lunch to families participating in an inter-Korean reunion at the Mount Kumgang resort on Tuesday as the families hold private meetings in their hotel rooms. The first of two three-day reunions this week ends today, with the second reunion scheduled to start on Friday. [JOINT PRESS CORPS]

South Korea’s Ministry of Unification, which handles relations with the North, said families privately met with each other in their hotel rooms from 10 a.m. to 12 p.m. and shared lunch from noon to 1 p.m., after which they convened in a large hall with other families from 3 to 5 p.m. for a group meeting.

In past events, families privately met on the second morning of the reunion but had lunch together in a group. The change, which a ministry official said was discussed in advance with Pyongyang, was intended to allow more intimate time together.

“I get so sad thinking we have to split again,” Park Ki-dong, 82, told his North Korean younger sister, Son-pun, 73, and brother, Sam-dong, 68, as they gathered for a group meeting. “There’s no next time.”

“Peace has to come our way,” Son-pun replied, “but the barrier is too high.”

“I think these are actually quite similar to what we have in South Korea,” said Sun-hee as she took a sip of North Korean lemon-lime soda. “It’s my first time seeing them in nearly 70 years, so I have so much to tell them,” she told a South Korean pool reporter. “I want to tell them the same thing I already told them yesterday and today over and over again.”

Kim Hye-ja, 75, said she felt like she was in a dream to have finally met her twin brother, Un-ha, after all these years.

Un-ha giggled and blushed as his sister showered him with affection.

“How come you’re not saying ‘I love you’ back?” Hye-ja nudged.

According to South Korean pool reports, North Korean officials who were dispatched to run the reunions cautiously asked South Korean journalists not to ask North Korean families any questions, but didn’t explain why.

Some North Korean officials were quoted as asking the South Korean reporters why President Moon Jae-in’s approval rating was dipping, and asked whether it had any chance of rebounding, and if so, when.

“Wouldn’t the family reunion help his rating?” asked one official. When a reporter replied that the event wouldn’t prove that much of a help, the official pressed on, “Then what will?”

Other North Korean officials, according to pool reports, expressed dissatisfaction with an unspecified country when asked about current affairs.

“Things have to improve step by step,” said an official. “But there’s a country that’s not budging at all.”

The reporters assumed the officials were obliquely referring to the United States.

Two family reunion events are taking place this week at the Mount Kumgang resort, the first of which started Monday and ends today.

In the first batch, 89 South Koreans, mostly gray-haired and frail, crossed the border on Monday morning with a delegation from the South.

They are expected to return home this afternoon by taking a road linking the two Koreas along the east coast, after sharing 12 hours with their North Korean relatives.

Upon South Korea's request, the schedule for today was changed to allow the participants to meet for one more hour in the morning, the Unification Ministry said.