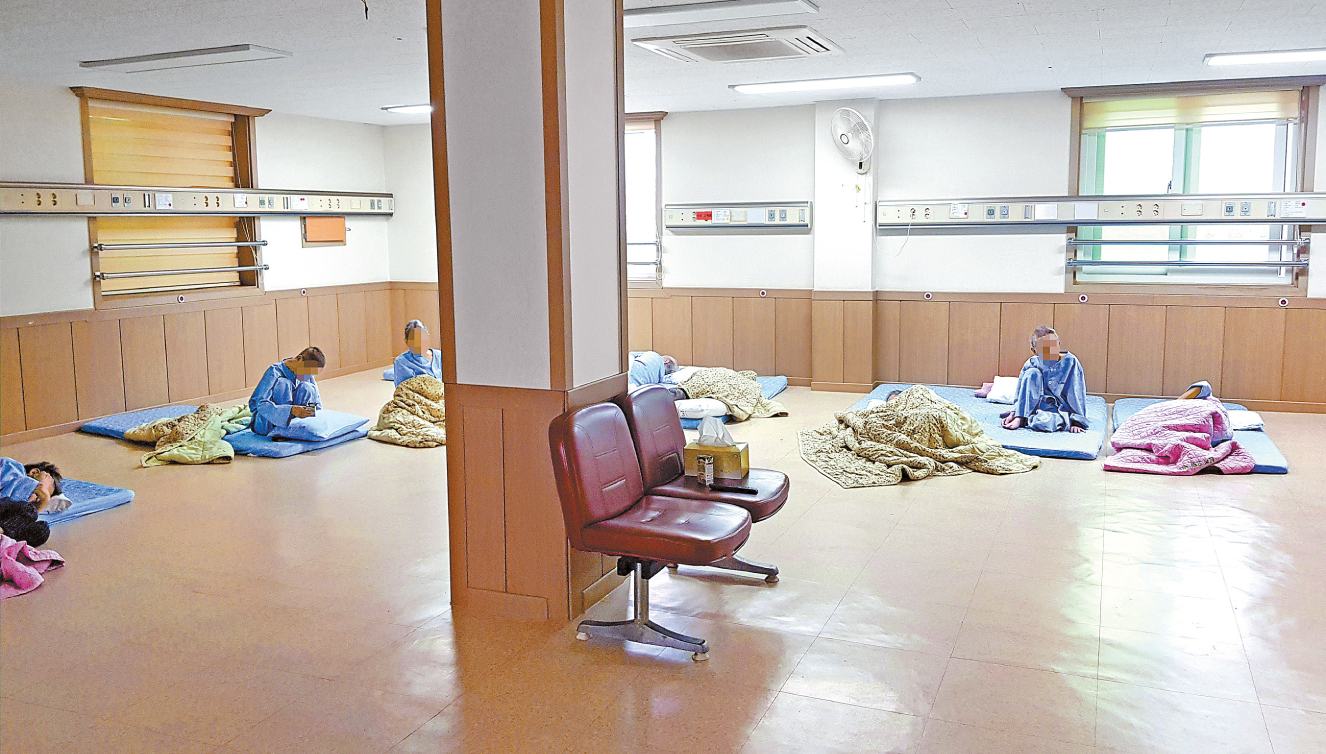 Patients lie on mattresses on the floor at a chronic care hospital in South Gyeongsang. While the hospital’s administrators say the patients were on the floor to prevent them from falling from their beds, it raises the risk that patients will not be able to reach the emergency button on the wall to call nurses in case of an emergency. [WE SUNG-WOOK]

The hospital in Miryang, South Gyeongsang, that caught fire on January 26, killing 46 and injuring over a hundred, has been accused of operating under false legal pretenses and depriving patients of proper care - and it’s not a unique case.

An investigation by police revealed that the corporate license of the Sejong Hospital in Miryang had been initially applied for by a doctor but subsequently handed over to a non-medical professional. The doctor was found to have received 4.7 billion won (＄4.2 million) for setting up the corporation.

Informally known as “manager hospitals,” such facilities are run by non-professionals who use medical practitioners as front men to obtain licenses to operate. Health laws stipulate that only medical professionals can operate hospitals, but the lucrative medical services field has attracted many shady operators.

Sejong Hospital, investigators later discovered, lacked fire doors or emergency exits and did not have an uninterruptible power system for its intensive care patients. It was not even required to install fire sprinklers due to its large aggregate floor space.

Korea has many medical facilities like Sejong: chronic care hospitals that primarily cater to elderly convalescents. As the country’s population rapidly ages, such services have seen skyrocketing demand, since they reduce the burdens of elderly care on families.

Though chronic care hospitals are ostensibly designed to address pre-existing and long-term care, most in effect act as hospices from which patients are rarely discharged.

Long-term care can translate into a steady stream of revenue for the facilities, fueling a demand to set up such facilities even at the risk of violating licensing laws.

According to the National Health Insurance Service, 967 hospitals were identified as “manager hospitals” from 2012 to 2016. Health authorities say around 20 percent of these were chronic care hospitals and they believe those numbers understate the real size of the industry.

Reporters from the JoongAng Ilbo tracked down one of many consulting firms known to help people set up illegal hospitals as a business venture. The single person present at its signless office in Gangnam, southern Seoul, was reticent when the matter was brought up. 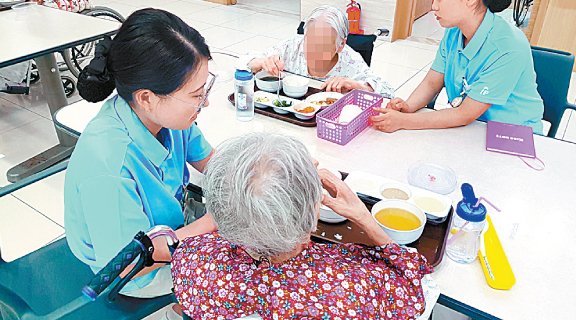 Medical staff attend to patients during mealtime at Heeyeon Hospital, a tier 1 hospital in Changwon, South Gyeongsang. [WE SUNG-WOOK]

Eventually he did open up. The consultant tried to interest the reporter in an 80-bed chronic care hospital which he said was a great deal since it was put up for sale cheaply in the aftermath of the Sejong Hospital fire.

“It may be closed now, but there will no problems in finding new patients because of its proximity to the city,” the consultant said. “You won’t even have to pay the 10 million won premium per patient since there aren’t any right now.”

When such a facility is sold, a buyer generally has to pay the seller 10 million won for every patient already institutionalized.

Last month, the Ministry of Health and Welfare announced measures to crack down on illegal hospitals, which are cited as one of the largest concerns in the national health insurance system.

At chronic care hospitals, 80 percent of the cost of patient care is paid by national health insurance with 20 percent paid by the patients.

Government subsidies have encouraged administrators at such hospitals to use any means possible to boost patient numbers. It was later found that Sejong Hospital in Miryang as well as another chronic care center in South Jeolla had given its employees 50 to 100 thousand won for every patient they were able to bring in.

For the homeless, national health insurance covers all costs. One hospital in Ganghwa County, Incheon, admitted over 300 local homeless people in July 2014 before it was caught by authorities.

The quality of care at these hospitals, meanwhile, has not kept up with the rising patient numbers. The primary reason, analysts say, is a sheer lack of personnel.

According to the Health Insurance Review and Assessment Service, a government agency that evaluates healthcare costs, most of the lowest ranking hospitals in its five-tier classification system had a severe dearth of medical personnel including both doctors and nurses.

The JoongAng Ilbo picked 20 chronic-care hospitals across the five tiers and found that while tier 1 hospitals employed a variety of medical personnel ranging from physical therapists and neurologists to general practitioners and speech pathologists, most in tier 4 or 5 lacked doctors other than those specializing in internal medicine.

A lack of personnel leads to negligence in patient care. At a tier 5 hospital in South Gyeongsang, reporters witnessed patients suffering from dementia sitting on the floor in the hallway without being cared for. One woman in her 30s, Kim Hyeon-a, said she moved her mother-in-law to another hospital after she witnessed a male nurse changing the diapers of a female patient with dementia.

A 47-year-old woman surnamed Shin who volunteered at a chronic care hospital in South Jeolla in 2016 says she once even witnessed an old woman dragging herself on the floor to the bathroom because no one was available to help her.

“When I saw these old people lying in their beds with no one to properly care for them,” she said, “I had the feeling that this facility was more like a concentration camp than a hospital.”

A man surnamed Lim, 50, who lives near a chronic care center in Daegu, said he witnessed patients being transferred to a different building while tied to their beds with duct tape.

Analysts say that overall improvement is necessary to ensure that hospitals are well-staffed to handle rising patient numbers and ensure quality care. Kim Tae-Hyun, a public health professor at Yonsei University, said, “The base criteria for admitting new patients needs to be raised and the public grant structure to hospitals needs to be revised in order to change the belief that running chronic care hospitals is a good way to make money.”