Olympic venues await decisions : Debate over who is responsible for arena maintenance continues

Olympic venues await decisions : Debate over who is responsible for arena maintenance continues

Six months of debate over whether to take down or maintain the Olympic venues have left the Jeongseon Alpine Center deserted. Without maintenance, the rocks around the ski lifts, above, have shifted due to heavy rains. [CHOI JEONG-DONG]

Six months have passed since the PyeongChang Winter Olympics and the Olympic stadiums that took billions of won to build now stand isolated and unused. When a special reporting team from JoongAng Ilbo visited the Jeongseon Alpine Ski Centre in Bukpyeong-myeon, Gangwon, there was nobody to be found at what used to be a heated arena holding thousands of spectators cheering on the Olympic athletes. The slopes were empty, its concrete bones exposed, and only memories of its glory days were left.

Just a few months ago, the world had its eyes on the Jeongseon Alpine Ski Centre when international champions Lindsey “Ski Queen” Vonn and Mikaela Shiffrin competed against each other in the Alpine combined final. Before it became an Olympic ski course, Jeongseon was a small treasure trove of nature. It was home to a wide variety of rare trees and plants, some having survived well over 500 years without being touched by urbanization.

Yet, what once used to be home to a lush forest and a rich ecosystem is now nothing but a bare field of pebbles and red dust. Forklifts and shovels are littered all over the grounds, while the gondola used during the games to take onlookers up the mountain has not been running for months. The snow removal vehicles scattered all over the mountain are the only evidence that this once was home to an Olympic ski stadium.

Out of the 12 competition arenas built for the PyeongChang Olympics, the arena that had required the most money to build was the Jeongseon Alpine Centre. What to do with the venue, which required 20.3 billion won (＄18 million) to build, has been a topic of debate since it opened. The central government and the Gangwon provincial government promised the environmental organization Green Korea that they would “remove 55 percent of the slope facilities in order to preserve the ecosystem after the Olympics,” in June 2012. 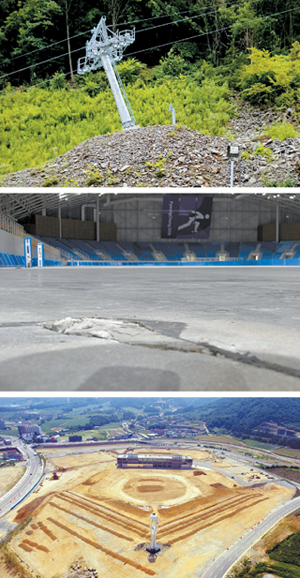 A ski lift tower, top, leans over after a recent landslide at the Jeongseon Alpine Center. Exposed concrete breaks through the ice at the Gangneung Speed Skating Arena, center, in Gangneung, Gangwon. The stadium, above, used for the opening and closing ceremonies, which cost 11 billion won (＄9.8 million) to build, has been totally removed and no longer stands. [SONG JI-HOON, WANG JUN-YEUL, GANGWON PROVINCIAL OFFICE]

However, a statement issued by the Minister of Culture, Sport and Tourism Do Jong-hwan on Aug. 3 opened room for discussion about the venue’s future. “The government will try to find ways to keep the Alpine Centre a sporting venue even if it means the government needs to invest more to make it happen,” said Minister Do. Since his statement, organizations demanding that the Alpine Centre stay true to its sporting purposes have engaged in debate with environmental organizations insisting on the immediate removal of the venue.

The Gangwon local government, which recently announced that they would bid to co-host the 2021 Winter Asian Games with North Korea, is now trying to delay the deconstruction and many interest groups are supporting the decision. “It is absolutely absurd to get rid of one of the [world’s] most advanced ski arenas after only using it for a mere five days,” said the Korean Ski Association. “Even if it is decided to focus on rebuilding the eco-system, facilities like the gondola, which can be a potential tourist spot, should stay the same,” said a representative from Jeongseon.

But the Ministry of Environment has only strengthened their view that the ski arena should be dismantled to save the ecosystem, and issued a one million won fine to the Gangwon provincial government on Aug. 5. “Choosing not to plant trees to restore the Mount Gariwang ecosystem is a violation of the Environmental Impact Assessment Act,” said a representative from the environmental ministry.

Due of the ongoing debate, the Alpine Ski Center has been left open and vulnerable to safety issues. In May and June, the venue was exposed to heavy rains that washed away the rocks and soil leaving behind large furrows along the slopes. The Gangwon provincial government hurried to plow two holes in the ground, creating a waterway that will drain the rain water, but many onlookers have been critical, saying that the temporary solution will not be effective in the long run.

The situation is worse at the top of the slope. Due to a significant loss of soil, pits and holes have been created all over the mountain. “Whatever they choose to do with this place, they must choose fast. With autumn coming along, if this place gets hit by a hurricane, the chances of a landslide are high,” an associate responsible for the construction of the waterway said.

The conflict between the central government and Gangwon provincial government about who should cover the expected financial loss that will occur if the Alpine Centre stays a sporting arena is also the reason why no decision has been made yet. If the venue remains a sporting arena, an estimated 500 billion to 1 trillion won will be needed to maintain the facilities. According to the Korean Industrial Strategy Institute, that means 37 million won per year will need to be paid by either the central government or Gangwon.

The future of other Olympic arenas is also creating complications. The Gangneung Speed Skating Arena, which took 12.6 billion won to build, has become an eyesore. The impeccably-built arena is now an enormous warehouse, with concrete showing through its ice floors. 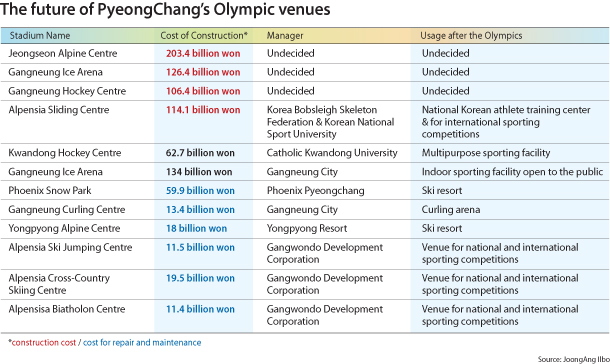 Over the past six months, many ideas about how to use the skating arena in the future have been suggested. Possible candidates are converting the arena into an indoor tennis court, a convention center, a practice arena for athletes or a refrigerated storing space. The sad reality is, even if the Gangneung Speed Skating Arena is turned into an ice rink, a financial loss of 14 million won will have to be paid annually. The 10.6 billion won Ice Hockey Arena has been turned into a warehouse.

Like the Jeongsan Alpine Center and the Gangneung Hockey Arena, the Gangneung Speed Skating Arena has no clear future. Currently, seven employees are tasked with upholding the arena’s Olympic legacy by maintaining the facility and making sure it doesn’t fall into disrepair.

“The original plan was to either tear down the arenas or move them to a different location. Since the government has decided on continuing to use these facilities, they should be responsible for paying for the cost of maintenance, but they are delaying,” stated the head of the Gangwon Provincial Office Culture, Sports and Tourism Bureau Yoon Sung-bo. “It is also difficult to accept how the central government changed its promise from reimbursing 75 percent of our financial losses to only 55 percent, then announcing that they needed to reexamine their promise from the start.”

“Stadiums that are built for international sporting events fall under the responsibility of the local government. The central government keeps its stance to partially pay only for the training of the national team or holding international events,” said Lee Hae-don, Head of the International Sports Division of the Ministry of Culture, Sports and Tourism, who is responsible for taking care of post-Olympics issues. “Gangwon is working on a research project that will help direct how to use the Olympic facilities,” he added.

“What to do with the stadiums afterwards is a hot potato between government and provincial officials but there are no developments from their discussions,” said an official from the PyeongChang Olympics Organization Committee. “The stadium that was used for the opening and closing ceremony cost 11 billion won to build but was immediately demolished as it was too much for a small city of 4,000 people to manage. Some said it was a waste of the government’s budget, but now some see it as a bold move that needs to be taken.”