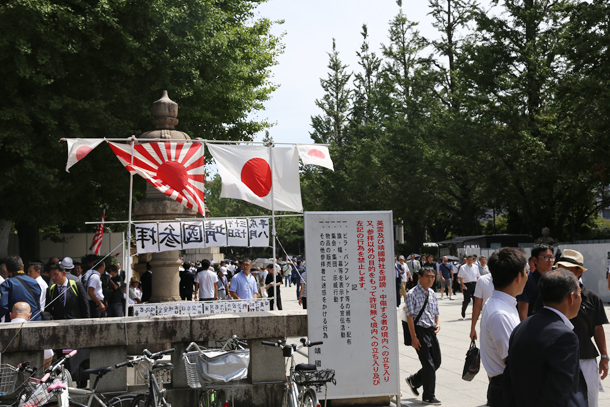 In late July, in the midst of the hottest summer on record, I visited Hiroshima, the city where an atomic bomb had been dropped. The site of the bombing has been made into Hiroshima Peace Memorial Park, where a cenotaph stands. The epitaph states, “Let all the souls here rest in peace for we shall not repeat the error.”

It is a pledge comforting the victims of the attack and a promise not to repeat the devastation of war. But as I read the phrases, someone pointed out, “The subject is not clear.” It is uncertain who would not repeat the error. The error can be interpreted as starting the war or using the atomic bomb. It was ambiguous who the “we” was.

The cenotaph opened to the public on August 6, 1947 at a memorial service that took place two years after the atomic bomb claimed 140,000 lives in Hiroshima. Then-Hiroshima Mayor Shinzo Hamai said that once the epitaph was unveiled, people around the world would oppose nuclear weapons and pledge peace. But the reality was different.

The ambiguous epitaph immediately sparked controversy. The cenotaph was erected when Japan was still under Allied occupation. So some argued that the subject was left ambiguous to please the United States. They were stressing that Japan was the world’s first victim of nuclear bombing without acknowledging their responsibility in the war. The cenotaph stands in the middle of the Peace Memorial Park, but the controversy is hardly peaceful.

I was reminded of Hiroshima when I met visitors at Yasukuni Shrine on August 15. Fourteen Class A war criminals are enshrined there, and crowds start lining up in the morning. I was surprised by the number of visitors who lined up for over an hour on a weekday under the sizzling sun.

When I asked why they came, they said without hesitation, “For the ancestors who waged the war for peace.” They iterated the rhetoric that beautified the war with peace. When asked “What do you think about starting the war?” they said, “It was a decision to prevent Asian countries from becoming European colonies.” I was speechless. “I came to repent as the ancestors fought and sacrificed their lives.”
They were no different from those in military uniform outside the Yasukuni Shrine promoting imperialism. Actually, their composure and confidence were scarier than the madness of war.

When Japanese monarch Akihito, who is to abdicate in April 2019, spoke for the last time at a memorial service for the war dead, and for the fourth year in a row, he mentioned “deep repentance.” For 30 years, he hoped for peace. But peace in Hiroshima Park and Yasukuni Shrine seem to have a different subject and meaning.