Aekyung gets trendy as HQ moves to Hongdae

Aekyung gets trendy as HQ moves to Hongdae 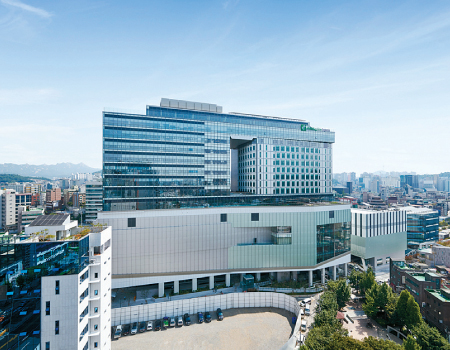 Aekyung Group started relocating to the neighborhood surrounding Hongik University this week, leaving behind its 42-year-old headquarters in Guro District, western Seoul, as it continues to expand its businesses catering to younger consumers.

“Five of our subsidiaries will finish relocating to the new office building this month, including AK Holdings and Aekyung Industrial,” the company said. “Jeju Air’s global sales team will join later this year.”

This is the first time that multiple Aekyung companies will be housed in the same building. The 17-story structure will include eight floors of office space, a 294-room hotel and a five-story shopping mall - all run by Aekyung subsidiaries.

Aekyung started out in 1954 as a soap manufacturer. For decades it was known as a maker of personal care brands that became household names in Korea like 2080 toothpaste and dishwasher liquid Trio. As revenue growth for daily necessities slowed down, the conglomerate started entering new markets in the 1990s, including department store chain AK Plaza.

The most lucrative businesses came in the 2000s. The expansion into cosmetics and the launch of low-cost carrier Jeju Air proved to be some of the conglomerate’s most successful business ventures.

Aekyung Group Vice Chairman Chae Hyeong-seok vowed in January that this year would be a pivotal period for the company to accomplish what he calls a “quantum jump.” Chae is the second-generation of the owner family to lead the company and the apparent architect of the move to the Hongik University area.

Revenue so far is showing positive indicators. Aekyung Group’s operating profit in the first half of 2018 was 190 billion won, a 23 percent jump from last year. The company aims to continue that momentum through the rest of the year.

A huge contributor was Aekyung Industrial. The subsidiary has always been the core of Aekyung’s business as the maker of personal care goods, but its recent growth is backed by the massive of its Age 20’s foundation pact.

After its launch in 2012, this particular item set best-selling records on multiple home shopping channels thanks to word-of-mouth recommendations - it sold two million sets last year alone. In this year’s second quarter, Age 20’s and cosmetics brand LUNA pushed Aekyung Industrial’s operating profit up 61 percent. During this period, cosmetics also outpaced personal care goods in the company’s portfolio for the first time with a 52 percent share.

Analysts generally give a rosy outlook for Aekyung Industrial this year, partly thanks to efforts to expand in the Chinese market.

“There’s high dependence on one single brand. Age 20’s takes up 90 percent of the company’s sales,” said Park Eun-jung, an analyst at Yuanta Securities in a report last month. “But Aekyung is continuing its growth by diversifying its market overseas.”

Another pillar of Aekyung Group’s success is Jeju Air, the low-cost carrier that entered the market in 2005. The affiliate has continued to grow in terms of operating profit for 16 quarters since 2014. Its operating profits for the year’s first half reached nearly 600 billion won this year, which is equivalent to what the company made during the entirety of 2015.

Now with 36 aircraft, Jeju Air is also launching a new business this year as it will run the Holiday Inn Express inside Aekyung Tower, due to open Sept. 1.