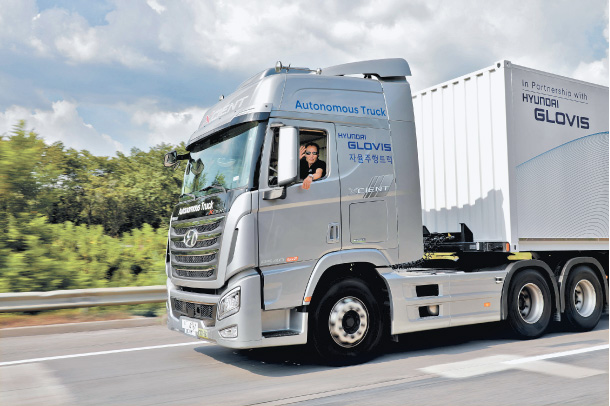 Korea’s No. 1 carmaker announced Wednesday that its partially self-driving Xcient truck, equipped with a trailer, drove 40 kilometers on a highway from Uiwang, Gyeonggi, to Incheon on Tuesday. The trip took about one hour.

Level 3 autonomous driving technology means that the car is able to drive itself under certain conditions based on standards from the Society of Automotive Engineers, though the driver always has to be on standby.

In collaboration with Hyundai Motor’s logistics affiliate Hyundai Glovis, the carmaker ran the test under a delivery scenario. The 40-ton Xcient drove with actual products set to be exported stacked up in the trailer.

The Xcient is the only large truck in Korea to have received a license from the Transport Ministry to test its self-driving features. A 29-kilometer route from Bugok Interchange to Seochang Junction on the Yeongdong Expressway and an 11-kilometer route from Seochang Junction to Neunghae Interchange on the Second Gyeongin Expressway are the only places where self-driving trucks can be tested.

The truck is equipped with 10 sensors, including three cameras in the front, side and back, and three Lidar (laser radar) systems in the front and on both sides.

When entering the highway, an alarm sound goes off and a screen in the front says that the truck is entering the self-driving route. With a push of a button on the steering wheel, the autonomous driving mode is activated. 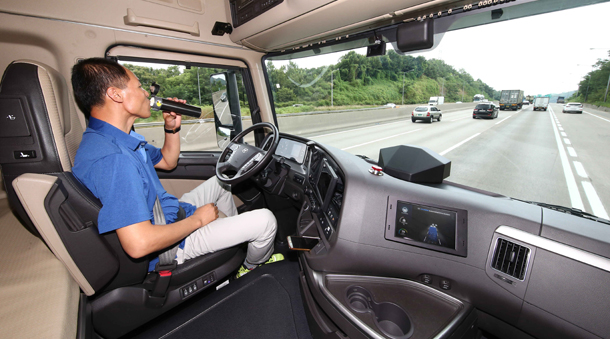 A driver in the Xcient lets go of the steering wheel while driving on a highway. [YONHAP]

According to Hyundai Motor, the truck was able to drive inside a lane or change lanes and acknowledged the movements of cars in front of it. It was able to pass through two tunnels as well.

“With the latest success, we proved that self-driving technology could bring innovation to the logistics industry,” said an official from Hyundai Motor.

“In the current stage, a driver intervenes in junctions and tollgates for the sake of other vehicles’ safety, but with continuous improvement of technology, we expect we can reach Level 4 earlier than expected as well,” the official added.

The carmaker aims to secure platooning technology for large-size trucks by the year 2020.