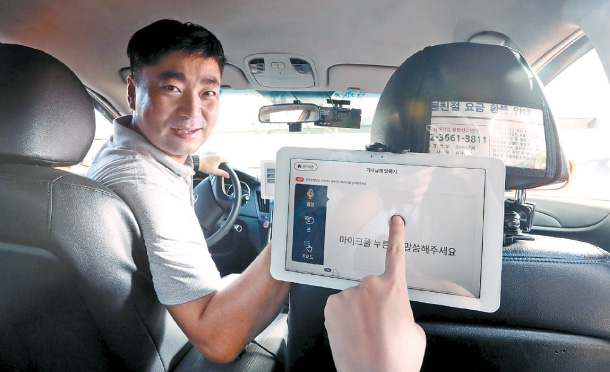 Choi Chul-sung, a deaf taxi driver, smiles while a passenger delivers a destination to him using a tablet. [WOO SANG-JO]

Taxis driven by the deaf have hit Seoul’s streets.

These taxis look the same as the thousands of other cabs that crowd Korea’s roads. The difference is that all communication between drivers and passengers in these vehicles is conducted via tablets with an app developed by university students.

Fifty-year-old Lee Dae-ho and 47-year-old Choi Chul-sung became the first deaf taxi drivers in Seoul last Monday. Both passed Seoul city’s taxi driver’s test before being hired by a private taxi company on Aug. 9. Lee and Choi have level 2 disability ratings, which means they have profound hearing loss and cannot hear even when using hearing aids.

Their taxis are equipped with tablets in the front and rear seats that passengers use to type in or dictate their destinations. After Lee and Choi receive the information and take passengers to the desired locations, the tablet asks passengers to choose between paying in cash or card.

Though Lee and Choi are the first deaf taxi drivers in Seoul, there are no restrictions on people with hearing loss applying for taxi licenses.

“According to previous studies, we could not observe any meaningful differences in the driving abilities of hearing people and deaf people,” said Myeong Myo-hee, a researcher from the Korea Road Traffic Authority, which oversees Korea’s drivers’ license service. “We do not expect there to be any safety issues with taxis driven by people hard of hearing.”

“Deaf people have never attained taxi licenses before,” said an official from the Seoul Metropolitan Government. “I think the main reason was the communication barrier.”

Students from Dongguk University succeeded in breaking down these barriers by developing Goyohan Taxi, an app they developed while participating in the student entrepreneurship club Enactus. Goyohan means silent in Korean.

“We wanted to expand job opportunities for deaf people,” explained Song Min-pyo, a senior majoring in computer engineering. Song is also the CEO of Coactus, the company that he and the Goyohan Taxi team created to expand their service. The team previously helped the city of Gyeongju in North Gyeongsang find their first deaf taxi driver in June.

Lee and Choi credited their new job for giving them “a chance at hope in life.”

Choi, who was born deaf, is a veteran of the transportation industry and has over 20 years of experience in driving and making parcel and fast food deliveries.

“I challenged myself to do this job because taxi driving has been my dream,” Choi said through a sign language translator.

Lee had been looking for a job to support his two children, who are now both in university. He became deaf after recovering from a fever at the age of three.

Choi and Lee said they try to be extra attentive to passengers’ needs in hopes of reducing prejudice against disabled taxi drivers.

“When I see passengers carrying heavy bags, I get out of the car and help put them in the trunk,” said Choi.

Not all of his experiences have been pleasant, however.

“There was one passenger who got out of my car and slammed the door as soon as he realized I was deaf,” recalled Lee.

Silent taxis are nonetheless expected to appeal to the large number of passengers who want a quiet ride without having to make small talk with drivers.

Choi and Lee also addressed concerns about their inability to hear posing a safety risk on the busy roads of Seoul.

“Even though we may not be able to hear or speak, we can see very well,” they said. “Because we have a disability, we pay more attention to driving safely and offering hospitable services.”