Kim Sun-wook finds new excitement: After a change of city and attitude, the pianist no longer feels burnt out

Kim Sun-wook finds new excitement: After a change of city and attitude, the pianist no longer feels burnt out 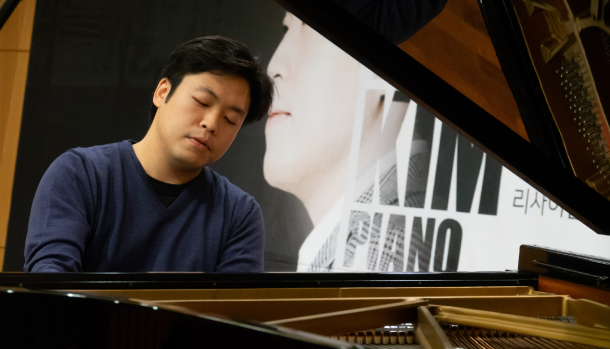 The youngest winner of the Leeds International Piano Competition, as well as its first Asian winner, pianist Kim Sun-wook, now 30, is known by many for his eloquent and colorful performances.

His passionate love for the piano drove him to play pieces until perfection and led him to win numerous international competitions and gain global recognition.

“When I was young, I really liked having my goals planned out. I used to dream big and make my plans accordingly,” said Kim during a press conference held at the Munho Art Hall in central Seoul on Tuesday. “During my childhood, I wanted to get things done quickly. I graduated earlier than others, and I really wanted to accomplish many things ahead of other people, such as becoming a professional musician.”

But after performing as a professional for 10 years, Kim saw his passion disappear and was at a loss for goals. Playing the piano no longer felt special and Kim grew tired of his daily routine.

“I loved music so much when I was young, but as I grew older, I [gradually] lost those feelings,” said Kim. “Basically, I forgot that I loved the music itself.”

Thankfully, many changes took place at the end of last year and the beginning of this year for Kim. One was his relocation to Berlin after living in London for 10 years. Another was a change in attitude.

“In the past, I wanted to have a strong presence as a musician in front of the piano,” said Kim. “But now, I just want to perform high-quality music and deliver it to the audience. Now, playing music doesn’t seem like a [dull] job.”

Kim will hold a nationwide tour, starting at the Hanam Art Center in Gyeonggi on Aug. 31. He will then perform at Hwaseong Banseok Art Hall in Gyeonggi on Sept. 1, Bupyeong Arts Center in Incheon on Sept. 6, Daegu Concert House in Daegu on Sept. 7 and Sejong Gugakdang in Yeoju, Gyeonggi, on Sept. 8. The tour will end on Sept. 9 at the Seoul Arts Center.

The program consists of four pieces from four musicians: Mozart’s “Piano Sonata No. 9 in D major,” Beethoven’s “Piano Sonata No. 17 in D minor,” “Op. 31, No.2 ‘Tempest,’” Debussy’s “Suite Bergamasque” and Brahms’ “Variations and Fugue on a Theme by Handel, Op. 24.”

The selections are unique because they were all written by Kim’s favorite composers in their 20s and 30s. When asked why he chose those pieces, he said that he didn’t put much focus into his personal preference, but rather put emphasis on the special theme of this concert.

“These pieces, which were written in the midpoint of the composer’s careers, could also be seen as their glory days,” said Kim. “As a performer in my early 30s, I tried to empathize with the pieces and find a link between the four composers.”

“I wanted to start the program with Mozart’s Piano Sonata,” said Kim. “The beginning of the concert carries the highest tension for both the audience and musician. Although it is quite difficult to perform Mozart’s pieces extremely well, they are nice choices to open up a concert as Mozart’s music is easy to enjoy.”

While performing these four pieces for the upcoming solo recital, Kim hopes he can deliver an enriching experience to the audience.

“In the old days, a composer would perform his or her piece, but in the 21st century, there is a distinction between the role of a composer and a performer,” said Kim. “Most performers receive songs from the composers and add new colors. Storytelling is not about telling a great story, and I am concerned about how I will deliver such refined music. Even though there is only one sheet, there are so many different ways to interpret it.”

“Overall, I hope this upcoming recital will allow me to see why I like the piano, and why I like playing on the stage.”