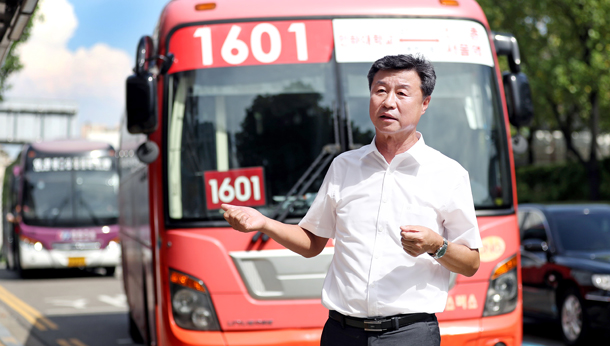 A group of leaders of six inter-city express bus companies threatened to suspend the operation of their buses, which run between Seoul and Incheon, earlier this month. They complained that a minimum wage hike is hurting their business and the opening of the Incheon Subway Line 2 is adding to their losses.

The Incheon city government was adamant that there is no way to support them and said that the city will run the bus lines if the companies stop their operation.

The group of bus operators agreed to withdraw their plan last week, but tensions are still high.
The JoongAng Ilbo sat down with Shin Dong-wan, the 59-year-old head of Seonjin Express.

A. Currently, there are eight inter-city bus corporations in Incheon. Of the eight, two companies are overseen by the Ministry of Land, Infrastructure and Transport. The other six companies want to put their business on hold. Among them, four companies, including us, also have intra-city buses so the business can be maintained [despite the temporary closure]. But the other two only have lines that go from Seoul to Incheon, so they need to close their businesses.


The accumulated losses were cited as the main cause of the suspension. How much are the losses?

The launch of the Incheon Metro Line 2 in 2016 put strain on the number of bus commuters. We have found it hard to make ends meet.
Last year’s minimum wage hike of 16.4 percent has pushed us further towards the edge, and we recently concluded that we can no longer run our business. Last year, we saw deficits and they will likely increase with the wage rise.

Our company has two inter-city bus lines that operate with 25 buses and around 60 drivers.


Does that 500 million won directly translate into financial losses?

Inter-city buses have already suffered losses. These costs are added on top of the losses. The additional cost is 500 million won, but bus fares remain the same, and no factors exist to increase the number of passengers.


Some people think that bus companies are complaining even though they fare well. What do you make of the perception?

Almost everyone pays for buses with transportation cards, not cash. So all the fares are reported to the Incheon city government, and they know the size of fare income. The amount of daily fares is 400,000 won. Since the city government knows the whole situation, it promised to offer 2.3 billion won in subsidies. But we haven’t received the funds.

After the June 13 election, the mayor and the public officials handling the matter have been changed. They first explained it will take a while to put things together, but later the government refused to provide the funding because of budget constraints.


To make up the losses, how much should the bus fare rise?

Now, the current charge is 2,650 won, but it should be at least 3,200 won. But increasing the fare is not that simple. It should go through a complex process of negotiations with other regional governments.


Do you think that the government should step in to oversee the business of inter-city buses?

Next year, we will see another minimum wage hike. As a private company, it is impossible to find a way to navigate all the costs and burdens.


How would the 52-hour work week affect the industry?

Now, we are running under a 68-hour work schedule. But we will stick to the 52-hour rule starting next year. That means we need to hire more drivers.

To have more people, we have to resort to cutting other drivers’ salaries by three quarters, which will make drivers’ monthly pay amount to around 2 million won.

I am not sure if there is anyone willing to work as a bus driver with that salary. We should adjust existing drivers’ wages and recruit more people next year. The recruitment will likely expand the size of monthly losses from 40 million won to 60 million won to 70 million won.


Why did you decide to pull out from the plan to suspend operations?

I wanted to go ahead with the plan, but other heads said that we need to wait until the end of this year for discussions. There were disagreements among employees, too. The two companies [without intra-city lines] are more desperate for any supportive measures.


The heads of the six companies visited Incheon City Hall every morning. What is the reason?

We were there to meet public officials who are in charge of dealing with the issue. We also requested a meeting with Mayor Park Nam-chun, and we could meet him for the first time on Aug. 17. But his stance was very different from when he led his election campaign.


Who is to blame for the ongoing crisis?

I will turn 60 next year. I have known many small merchants and self-employed people. They all had to fire part-time workers and work on their own. It’s a torturous situation. It sounds good to say that rising incomes for people will bring prosperity. But this is based on a theory.
Prices — whether they are electricity bills or product prices — should go up. The number of jobs is on the decline. People think that those running businesses earn a lot of money, but that’s not true. I hope that the Moon Jae-in government will get things right, but it seems like there are more people who are disappointed with the president.