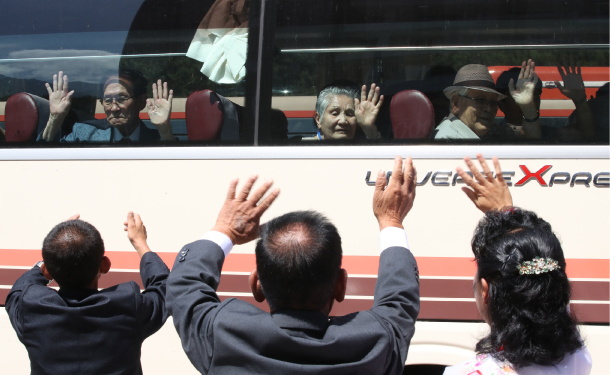 North Koreans bid farewell to South Korean relatives leaving the Mount Kumgang resort Wednesday at the end of a three-day reunion, the first time they saw each other since the 1950-53 Korean War. A second batch of reunions runs from Friday through Sunday in the same venue. [JOINT PRESS CORPS]

Families who met their loved ones for the first time since the 1950-53 Korean War this week promised to meet again when the countries reunify as a three-day reunion program wrapped up with cataracts of tears and what will almost certainly be another long separation.

“We’ll see again when both Koreas become one,” Yang Myong-sok, 63, and Yang Myong-chon, 60, told their South Korean uncle, Yang Gyeong-yong, 89, as they exchanged phone numbers and home addresses on Wednesday morning during a group meeting.

Kim Byeong-oh, 88, refused to lock eyes with his North Korean younger sister, Kim Sun-ok, 81, when he arrived at their table, and gazed into empty space. Tears rolled down his wrinkled face as Sun-ok urged him not to cry.

“Oppa [older brother],” she trembled, reaching out to grasp his hand. “Don’t cry. You mustn’t cry.”

Shin Jae-cheon, 92, from Gimpo, Gyeonggi, found relief in the fact that he actually lives close to his sister, Sin Gum-sun, 70, who is just across the demilitarized zone in the North Korean border town of Kaesong.

As the crow flies, the two cities are 38 kilometers (24 miles) apart.

“I want to take you home and feed you,” said Jae-cheon. “Drop by before you die.”

“Gimpo and Kaesong are so close!” Gum-sun replied cheerfully.

“It would only take me 40 minutes to drive there,” Jae-cheon said. “You’d return home feeling so full if we could freely see each other.”

Among 89 South Koreans who were chosen by Seoul to participate in the first batch of reunions this week, Lee Jae-il, 85, who was accompanied by his younger brother Jae-hwan, 76, will return home in doubt. They were supposed to meet their North Korean niece Ri Gyong-suk, 53, and nephew Ri Song-ho, 50, but the Lee brothers refused to believe that the Ris they met were actually their relatives.

Jae-hwan stormed out of the convention hall on the first day of the reunions Monday, saying the Ris said they weren’t told about him from their father, Jae-hwan’s brother, who died in the North.

North Korean authorities denied there was a mistake and brought family documents to prove they were right, according to South Korean pool reports. Yet the Lees appeared not to have relented through Wednesday.

The second batch of South Koreans meeting relatives from North Korea for the first time in decades is scheduled to cross into the North on Friday and stay until Sunday.