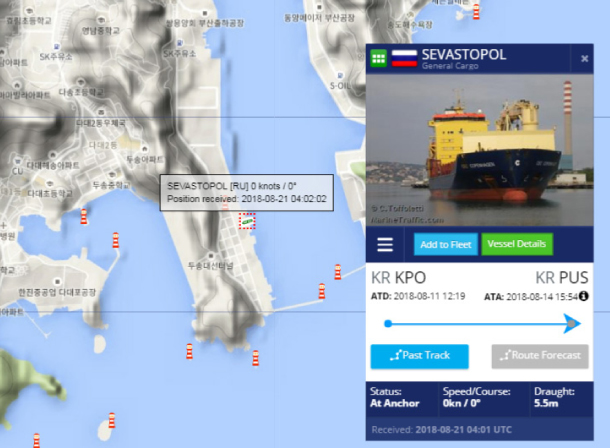 The Russian-flagged ship Sevastopol, one of six Russian vessels sanctioned by the United States, arrived at Busan Port and remained anchored there as of Tuesday, according to global shipping data site Marine Traffic. [YONHAP]

In its third round of sanctions against Russian entities this month due to under-the-table deals with North Korea that violated international sanctions, the U.S. Treasury Department targeted the two firms and six vessels for their involvement “in the ship-to-ship transfer of refined petroleum products with North Korea-flagged vessels,” which the department said was “prohibited by the UN Security Council.”

The two targeted firms are Vladivostok-based Primorye Maritime Logistics and Gudzon Shipping Company. The two firms’ will now have their property and interests in the United States frozen. The Treasury Department also brought sanctions against “registered ship owners and managers of Russia-flagged merchant vessel Patriot” along with five other vessels, accusing it of having conducted “two ship-to-ship transfers of oil for the benefit of North Korea” in early 2018.

The Treasury Department went on to specify that the Russian vessel Patriot transferred a total of 3,500 tons of oil to two North Korea-flagged vessels, the Chong Rim and Chon Ma San.

The department said the buyer of the oil was the Workers’ Party of Korea Office, which the U.S. described as engaging “in illicit economic activities for North Korean leadership” in a statement issued Tuesday.

“Ship-to-ship transfers with North Korea-flagged vessels from Russia or elsewhere of any goods being supplied, sold, or transferred to or from the DPRK are prohibited under the UN Security Council resolutions on North Korea and are sanctionable under U.S. law,” said Treasury Secretary Steven Mnuchin in the statement. The DPRK is an acronym for the North’s official name, the Democratic People’s Republic of Korea.

“Consequences for violating these sanctions will remain in place until we have achieved the final, fully verified denuclearization of North Korea,” he continued.

Of the six Russian vessels now facing U.S. sanctions, four entered South Korean ports this year, according to the Voice of America on Wednesday. One sanctioned vessel, Sevastopol, arrived in the Port of Busan on Aug. 14 and was anchored there as of Tuesday, according to the global shipping data site Marine Traffic.

The latest U.S. sanctions on Russian entities came as U.S. Secretary of State Mike Pompeo is expected to travel to Pyongyang for the fourth time to flesh out details of a denuclearization deal with North Korean leader Kim Jong-un. The United States’ continued sanctions on foreign entities for illicit deals with the North is seen as a display of Washington’s determination not to lift sanctions unless Pyongyang takes tangible steps toward denuclearization.